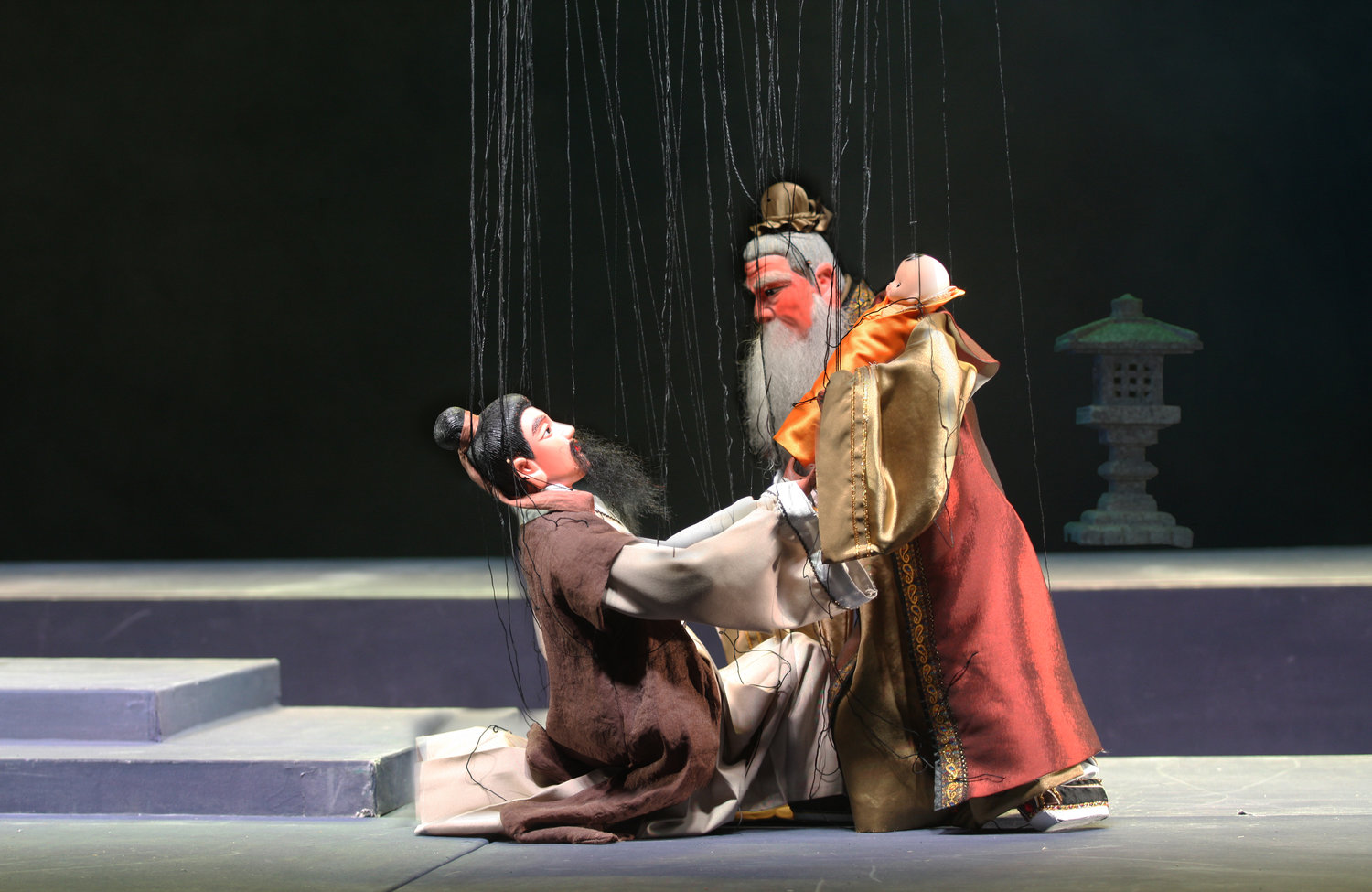 On a five-square-meter stage in Tangfang town, Jiangxi province, a marionette show attracts many residents with its plot twists and turns. During the show, some skits and scenes from masterpieces of traditional art forms such as Peking Opera and Jiangxi’s Gan Opera are performed.

The entire show is run by the Qixin Puppet Troupe, a farmers’ cultural group, established in 1997. In the past 25 years, it has performed more than 3,500 times in the mountainous region between Jiangxi and Fujian provinces.

In China, such puppet performances, where figures are made to move by puppeteers pulling strings, dates back to the Han Dynasty (206 BC–AD 220). It reached its heyday during the Qing Dynasty (1644-1911). The folk art in Tangfang was listed as a Jiangxi provincial intangible cultural heritage in 2013.

Marionettes are wooden dolls that are mobile, and can be gracefully manipulated. Tied with strings or wires and manipulated by a puppeteer, the figures can perform varied actions.

Lasting 10 minutes or more, a typical show involves controlling up to 36 strings to ensure a puppet, about 70 to 120 centimeters tall, walk, dance, ride a horse or even play a musical instrument.

Although not a commonly seen art form in cities, a handful of puppeteers like Xie Bangyin, head of the Qixin troupe, are trying to preserve the art form for future generations.

“As long as there are people who would like to watch, our troupe will keep performing,” the 55-year-old Xie says.

He adds that they can perform in fields, on public squares, at temples and other venues to meet audience requirements.

Fascinated by folk music since his 20s, Xie started to study performance skills in marionette shows in 1996. He has become a well-known puppeteer and voice artist.

The shows are usually performed during Spring Festival and to celebrate other happy occasions such as weddings or the completion of a new house.

During a show, the audience can see the puppets and a folk orchestra, while the puppeteers stand behind a curtained backdrop.

To attract younger audiences, Xie has worked to combine modern stories and technology into new shows.

“I hope our performance can reach a wider audience. What’s more, I would like to see more young people get involved and revive the folk art,” Xie says.

To better preserve the art form, Xie promotes such shows at local primary and high schools.

Authorities have also taken measures to save the intangible heritage from extinction, designating troupes to preserve and further the art form since 2006.

Other than Jiangxi, string puppetry has developed in Quanzhou, Fujian. At the opening ceremony of the 2008 Summer Olympics in Beijing, the Quanzhou Marionette Troupe presented Huoyanshan (Flaming Mountain), a classic repertoire that was created by the troupe in 1978.

Formerly led by the legendary puppet master Huang Yique (1928-2007), known as the pioneer of China’s modern string puppetry, the Quanzhou Marionette Troupe has entertained audiences in many countries.

Russia To Continue War In Ukraine Even If Kyiv Agrees To Not Join NATO, Says Putin’s Ally
Actress Zhao Lusi Caused A Commotion Over Accidental Reveal Of Her Nipple Pasties