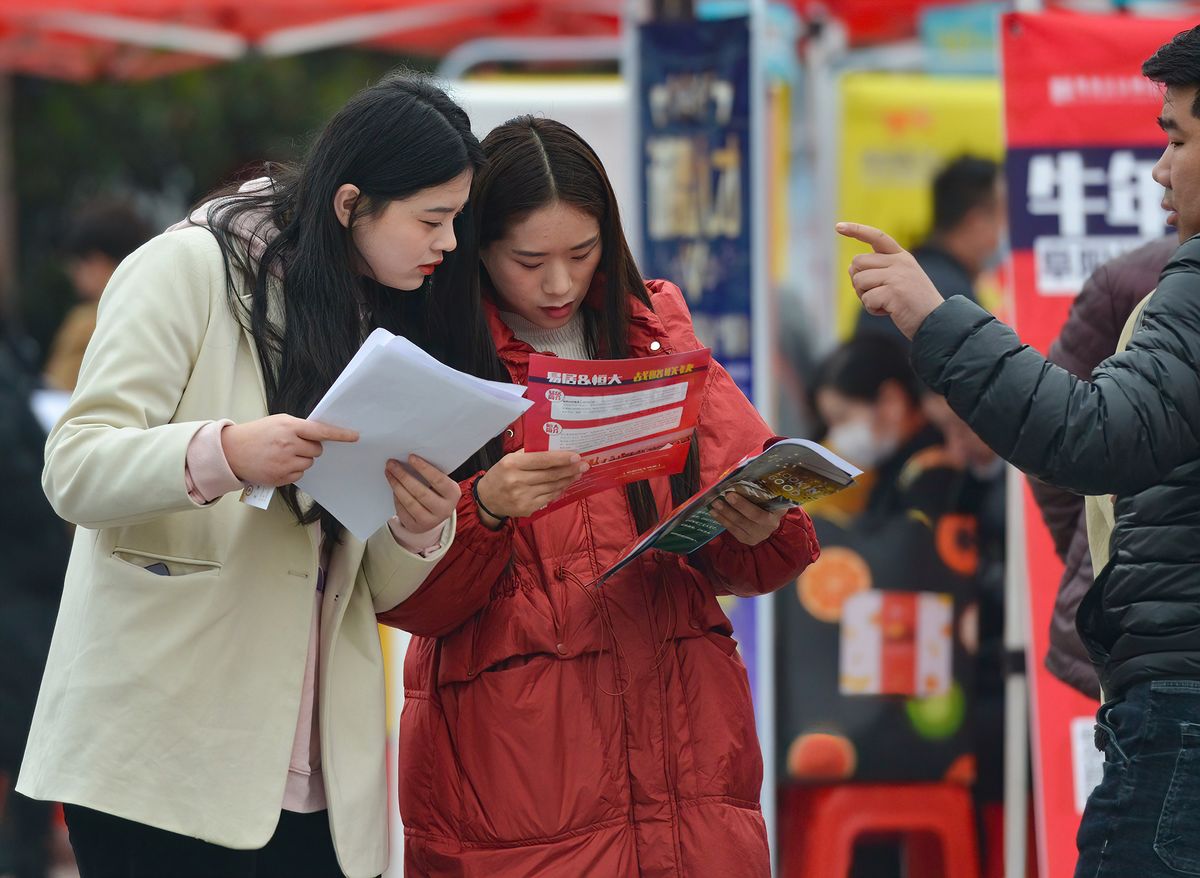 China’s slowing economy has left millions of young people fiercely competing for an ever-slimming raft of jobs and facing an increasingly uncertain future.

Official data released this month showed one in five young people in Chinese cities was out of work in July – more than three times the national average and the highest recorded since January 2018.

Nearly 11 million graduates entered China’s bleak job market this summer with the economy growing at 0.4 per cent in the second quarter, the weakest in two years.

Zhao Yuting, 22, told AFP that companies were reluctant to hire as the economy cools – and that experienced workers were now jostling for entry-level jobs, elbowing out green hands such as her.

Since graduating in July, she submitted her CV to dozens of companies.

Only a handful called her back for an interview, only to turn her down saying she lacked experience.

Armed with a degree in English, Zhao thought she could earn a living as a tutor until she found full-time work.

But recent crackdowns on the tech and education sectors, which usually absorb fresh talent, have evaporated such jobs.

“I’ve been job hunting for two or three months but the prospects of being hired look slim,” said Zhao, who has been forced to move back in with her parents while she hunts for work.

“The longer it takes, the greater the pressure.”

Analysts blame a slowing economy crippled by COVID-19 lockdowns, as well as the large cohort entering the labour force during the graduating season in July and August, for the slim prospects facing China’s youth.

Official data does not track unemployment among rural youth, and the real jobless population could be more than double the official number, estimated Zhuang Bo, an economist at research group TS Lombard.

Blue-collar workers, too, are struggling to find work as growth in the manufacturing and construction sectors cools.

“The reality is more serious than what the data shows,” said Ho-fung Hung, who specialises in China’s political economy at Johns Hopkins University.

“If the problem continues without remedy, it will easily spread social disorders.”

At a job fair in the tech hub Shenzhen, long lines of anxious parents and young graduates waited for a chance to chat with recruiters.

But headhunters at the fair said they were cherry-picking graduates from top universities, because only a few positions were available.

“My goal was to work in Shenzhen, in China’s Silicon Valley,” Luo Wen, a computer science graduate, told AFP.

“But after more than four months of searching, I’m ready to work even in a smaller city, for less pay.”

“I Can’t See the Future”

Graduates who managed to find work this year were offered salaries that were on average 12 per cent less than last year, data from online recruitment firm Zhaopin showed.

And while some job seekers were lowering their ambitions, others were biding their time pursuing further studies.

Experts warned that this may lead to “degree inflation”, where employers demand higher and higher qualifications for jobs that do not necessarily require them.

Analysts blamed government policies that saw a rapid rise in college students over the past decade as the economy failed to accommodate more knowledge workers.

“The pandemic and lockdowns simply aggravated the problem,” Hung said.

The government has pledged to shore up employment by offering tax relief for small businesses and more start-up funding.

Premier Li Keqiang has said China’s employment crisis is “complex and grave” and called on state-owned companies to step up to stabilise the economy.

And as growth in the private sector slows, job seekers have flocked to cram schools to prepare for highly competitive civil service exams.

A recent survey by 51job, one of China’s biggest job search services, found that 40 per cent of respondents preferred stable state jobs over corporate careers.

But for Zhao, who cannot afford to study further and does not have the connections to secure a government job, few options remain.

“I feel that I can’t see the future,” she said.

“I haven’t made any progress. It’s miserable.”