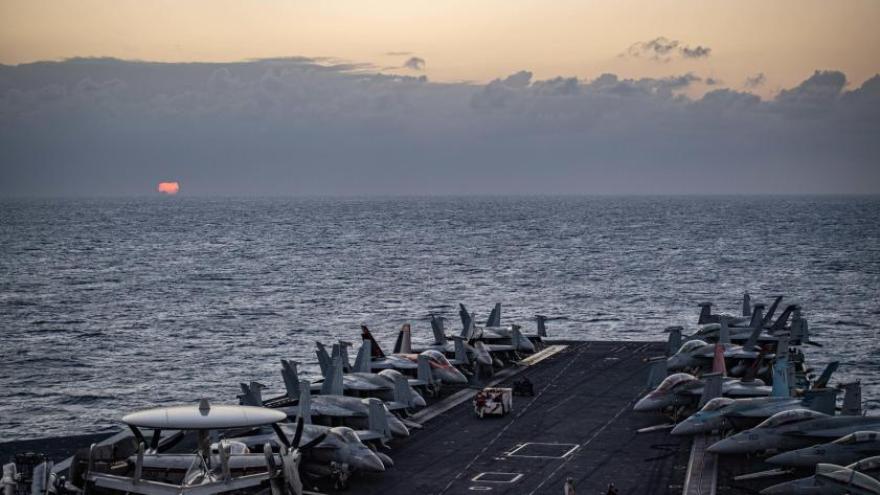 A US carrier strike group began operating in the South China Sea on Thursday, the Navy announced, amid heightened tensions with Beijing, which claims much of the body of water as its sovereign territory.

Two Chinese ships are already tailing the US group, a defense official told CNN, which consists of an aircraft carrier, a guided missile cruiser, and three guided missile destroyers.

The Nimitz Carrier Strike Group, which has lethal and non-lethal capabilities from “space to undersea, across every axis, and every domain,” according to its commander, entered the South China Sea for the first time as part of its current deployment.

The deployment comes as the US military bolsters its presence in the region in an effort to deter China, which is undergoing a rapid modernization and expansion of its own military and nuclear capabilities.

This week, the US and Japan announced a bolstered US Marine presence in Okinawa, which would have advanced intelligence and anti-ship capabilities. The two allies also announced a series of other initiatives designed to bring the militaries closer together in the face of what they see as China’s growing assertiveness in the region.

“We share a common vision with Japan to maintain a free and open Indo-Pacific and all the things that we’re doing, you know, point towards that direction,” said Defense Secretary Lloyd Austin on Wednesday, speaking with Secretary of State Antony Blinken and their Japanese counterparts in Washington.

Three weeks ago, a Chinese J-11 fighter jet intercepted a US RC-135 reconnaissance aircraft over the South China Sea in what the US called an “unsafe maneuver.” The RC-135 Rivet Joint was forced to take evasive action, the US said, when the Chinese jet closed to within 20 feet of the larger, slower reconnaissance jet.

The People’s Liberation Army fired back with their own account of the interception, claiming it was the US aircraft that had “abruptly changed its flight attitude” with a “dangerous approaching maneuver,” despite a Chinese military video showing nothing of the sort.

The encounter underscored the inherent tensions related to the South China Sea, where Beijing has used its own artificial militarized islands to advance a claim of sovereignty not recognized by the US or its allies.

The Chinese Navy routines tails US warships operating in the South China Sea, even claiming on occasion that it drove away the US vessels after they have left the disputed waters.

In November, China claimed that it forced the USS Chancellorsville out of the South China Sea after it “illegally entered” the waters without Beijing’s approval, which showed the “US is a true producer of security risks” in the region.

The US responded bluntly, calling the Chinese account “false” and the “latest in a long string of (People’s Republic of China) actions to misrepresent lawful US maritime operations and assert its excessive and illegitimate maritime claims at the expense of its Southeast Asian neighbors.”

The US guided missile cruiser was operating in the South China Sea as part of a freedom of navigation operation under international law, the Navy said.

“All nations, large and small, should be secure in their sovereignty, free from coercion, and able to pursue economic growth consistent with accepted international rules and norms,” the US said at the time.