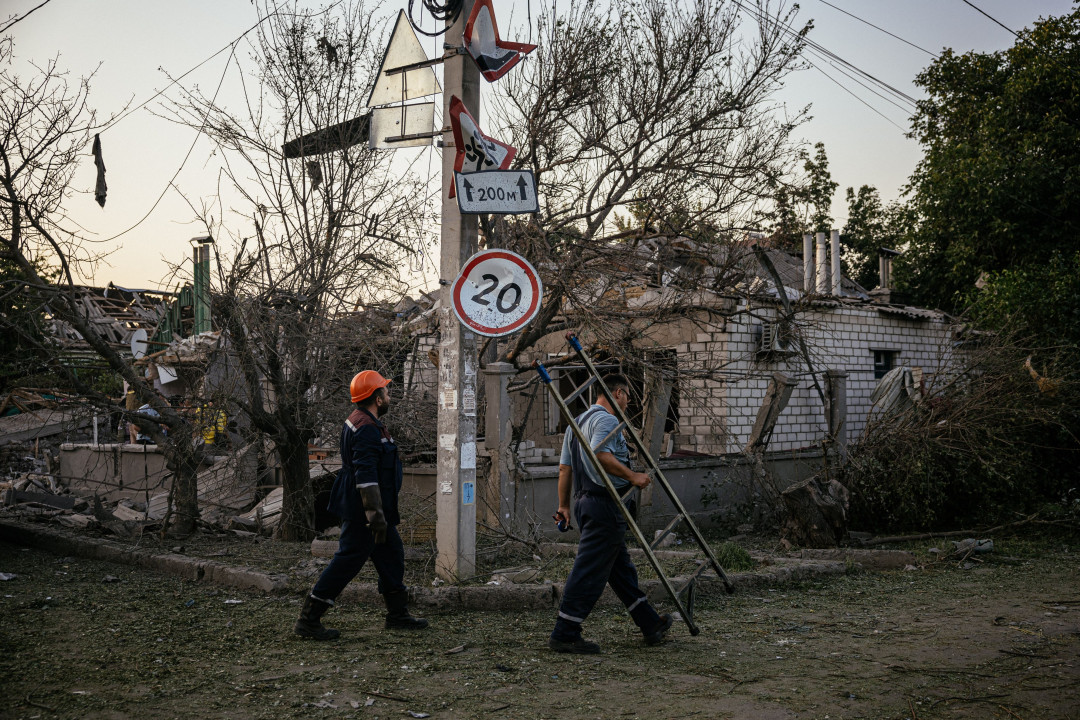 Ukraine says it has begun counter-offensive to retake Russian-held south.

Ukraine announced on Monday the start of a long-awaited counter-offensive to retake territory in the south seized by Russian forces since their invasion six months ago, a move reflecting Kyiv’s growing confidence as Western military aid flows in.

The news came as a team from the UN nuclear watchdog headed to Ukraine to inspect the Zaporizhzhia nuclear plant – captured by Russian forces in March but still run by Ukrainian staff – that has become a hotspot in the war.

Moscow and Kyiv have traded accusations of shelling in the vicinity of the nuclear plant, Europe’s largest and close to front lines, amid fears of a radiation disaster in a country still haunted by the 1986 Chernobyl disaster.

Russia rapidly captured swathes of Ukraine’s south near the Black Sea coast, including the city of Kherson, in the early phase of the war in stark contrast to its failed attempt to capture the capital Kyiv.

Ukraine has been using sophisticated Western-supplied weapons to hit Russian ammunition dumps and wreak havoc with supply lines. Humeniuk told a briefing on Monday that Ukraine had struck more than 10 such ammunition dumps in the past week, adding they had “unquestionably weakened the enemy.”

She declined to give details of the counter-offensive, saying Russian forces in southern Ukraine remained “quite powerful.”

The governor of Ukraine’s Russian-annexed Crimea Peninsula, Sergei Aksyonov, dismissed her announcement as “another fake of Ukrainian propaganda.” Crimea is adjacent to the Kherson region.

Russia’s RIA news agency, quoting local official Vladimir Leontiev, reported that people were being evacuated from workplaces in Nova Kahokva, a town 58 km (36 miles) to the east of Kherson, after Ukrainian forces carried out more than 10 missile strikes there.

Earlier, the head of the International Atomic Agency (IAEA) said he would lead a team of inspectors this week to the Zaporizhzhia plant, on the Dnipro river in southern central Ukraine, without specifying the expected day of their arrival.

“We must protect the safety and security of Ukraine’s and Europe’s biggest nuclear facility,” Rafael Grossi said in a post on Twitter.

The IAEA tweeted separately that the mission would assess physical damage, evaluate the conditions in which staff are working at the plant and “determine functionality of safety & security systems.” It would also “perform urgent safeguards activities,” a reference to keeping track of nuclear material.

On Monday Russian-installed officials said a Ukrainian missile strike had punched a hole in the roof of a fuel depot at the Zaporizhzhia plant.

Russia’s defense ministry said its forces had shot down a Ukrainian drone that was trying to attack the nuclear power station, Russian news agencies reported. It said there was no serious damage and radiation levels were normal.

Reuters could not independently verify either report.

The Kremlin said the IAEA mission was “necessary” and urged the international community to pressure Ukraine to reduce military tensions at the plant.

The United Nations, United States and Ukraine have called for a withdrawal of military equipment and personnel from the nuclear complex to ensure it is not a target. But the Kremlin again ruled out vacating the site.

Russian foreign ministry spokeswoman Maria Zakharova said the IAEA mission must carry out its work in a politically neutral manner. “They must be objective,” she told Rossiya 24 television channel.

Russian forces fired at Enerhodar, the Dnipro riverside town where the plant is located, Ukrainian President Volodymyr Zelensky’s chief of staff said late on Sunday on his Telegram channel alongside a video of firefighters dousing burning cars.

“They provoke and try to blackmail the world,” Andriy Yermak said.

Liliia Vaulina, 22, among a growing number of refugees from Enerhodar arriving in the Ukraine-held city of Zaporizhzhia, some 50 km (30 miles) upriver from the plant, said she hoped the IAEA mission would lead to demilitarization of its area.

“I think that they will stop the bombing,” she told Reuters.

Two of the plant’s reactors were cut off from the electrical grid last week due to shelling.

Russia calls its actions in Ukraine a “special military operation” to demilitarize its southern neighbor. Ukraine, which won independence when the Russian-dominated Soviet Union broke up in 1991, and its Western allies have dismissed this as a baseless pretext for a war of conquest.

The invasion of Ukraine has touched off Europe’s most devastating conflict since World War Two.

Thousands of people have been killed, millions displaced and cities blasted to ruins. The war has also threatened the global economy with an energy and food supply crisis.

On Monday, Zelensky accused Russia of trying to prevent European nations from filling their gas storage facilities enough to cope with the coming winter.

Sweden, which along with Finland plans to join NATO in response to Russia’s invasion, announced nearly $50 million worth of additional military aid to Ukraine on Monday during a visit to Stockholm by Ukrainian Foreign Minister Dmytro Kuleba.

Kuleba urged Sweden to provide weapons such as howitzers and shells. “Every euro, every bullet, every shell matters,” he said.

Germany will also send more arms to Ukraine in the coming weeks and help upgrade Kyiv’s artillery and air defense capacities, Chancellor Olaf Scholz told a conference in Prague, where he also reaffirmed German support for Ukraine and several other ex-Soviet republics to join the European Union.

Russia and the West in Conflct by Mikhail Gorbachev’s
Report: Cameron Young won’t join LIV Golf, has ‘decided to stay’ with the PGA Tour