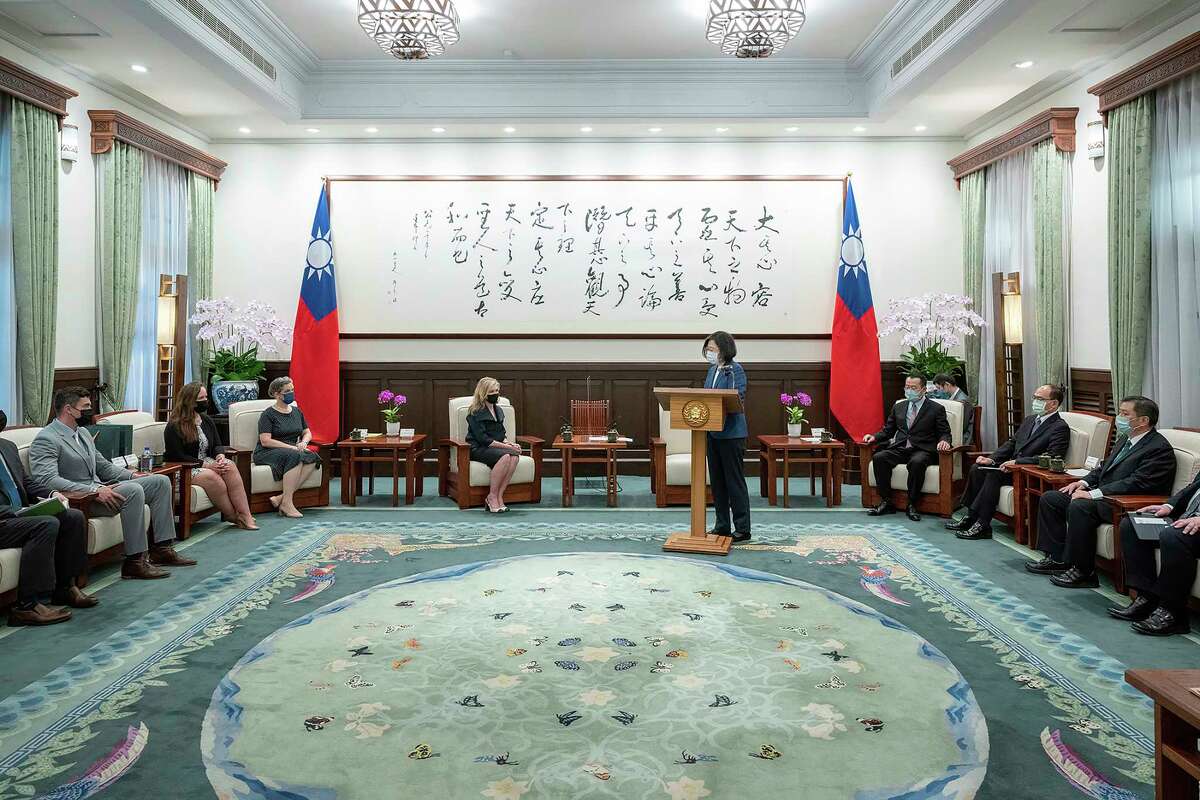 Taiwan’s leader on Friday said China and Russia are “disrupting and threatening the world order” with Beijing’s recent large-scale military exercises near the island and Moscow’s invasion of Ukraine.

President Tsai Ing-wen was speaking during a meeting in Taipei with U.S. Sen. Marsha Blackburn, who is on the second visit by members of Congress since House Speaker Nancy Pelosi’s trip earlier this month. That visit prompted China to launch military exercises in which it fired numerous missiles and sent dozens of warplanes and naval ships to virtually surround the island. Some ships crossed the center line in the Taiwan Strait that has long been a buffer between the sides.

China claims Taiwan as its own territory, to be brought under its control by force if necessary. Beijing has also boosted its relations with Russia and is seen as tacitly supporting Moscow’s attack on Ukraine.

“These developments demonstrate how authoritarian countries are disrupting and threatening the world order,” Tsai said.

Blackburn, a Republican from Tennessee, reaffirmed shared values between the two governments and said she “looked forward to continuing to support Taiwan as they push forward as an independent nation.”

In later remarks at the Foreign Ministry’s Institute of Diplomacy and International Affairs, Blackburn criticized leaders she did not identify for failing to take the threat from authoritarian regimes seriously enough.

Xi Jinping, China’s president and leader of the ruling Communist Party, “will not stop threatening the safety and security of Taiwan simply because it would be in everyone’s best interest to do so,” she said. “He is not a normal leader. And he has no interest in normal reactions or normal relations with the rest of the world.”

China sees high-level foreign visits to Taiwan as interference in its affairs and a de facto recognition of Taiwanese sovereignty. China’s recent military drills were seen by some as a rehearsal of future military action against the island, which U.S. military leaders say could come within the next few years.

Along with staging the exercises, China cut off contacts with the United States on vital issues, including military matters and crucial climate cooperation, raising concerns over a more aggressive approach by Beijing. It also called in U.S. Ambassador to China Nicholas Burns to formally complain. He later said China was overreacting in order to manufacture a crisis.

Due to the separation of powers in the U.S. government, the executive branch has no authority to prevent legislators from making such foreign visits and Taiwan benefits from strong bipartisan support in Washington. China, where the Communist Party wields total control over the country’s politics, refuses to acknowledge that fundamental principle.

U.S. State Department spokesperson Vedant Patel said members of Congress and elected officials “have gone to Taiwan for decades and will continue to do so,” and that it was in line with U.S. policy to only maintain formal diplomatic ties with Beijing.

“We’re going to continue to take calm and resolute steps to uphold peace and stability in the region and to support Taiwan in line with our longstanding policy,” Patel said at a briefing Thursday.

Meanwhile, Taiwanese Foreign Minister Joseph Wu told reporters Friday that “China’s motivation is to destroy the Taiwan Straits’ status quo, and after this they want to cut down on Taiwan’s defensive space.”

Taiwan is seeking stepped-up defense cooperation and additional weaponry from the U.S., along with closer economic ties.

In their meeting, Tsai and Blackburn underscored the importance of economic links, especially in the semiconductor sector, where Taiwan is a world leader and the U.S. is seeking greater investment at home.

Blackburn arrived in Taipei late Thursday after visiting Fiji, the Solomon Islands and Papua New Guinea as part of a U.S. push to “expand our diplomatic footprint in the area,” her office said in a statement.

“The Indo-Pacific region is the next frontier for the new axis of evil,” Blackburn, a supporter of former President Donald Trump, was quoted as saying. “We must stand against the Chinese Communist Party.”

China has been making inroads in the western Pacific, signing a broad security agreement with the Solomon Islands that the U.S. and allies such as Australia see as an attempt to overthrow the traditional security order in the region.

Pelosi was the highest-level member of the U.S. government to visit Taiwan in 25 years. China’s response was to announce six zones surrounding the island for military exercises that included firing missiles over the island, some of which landed in Japan’s exclusive economic zone.

Following Pelosi’s trip, a delegation of House and Senate members visited. This week, Indiana’s governor made a visit focused on business and academic cooperation. U.S politicians have called their visits a show of support for the island.

Blackburn, whose visit is to last three days, also met with Foreign Minister Wu and Secretary General of the National Security Council Wellington Koo, along with members of the American business community.

Washington has no official diplomatic ties with Taipei in deference to China, but remains the island’s biggest security guarantor, with U.S. law requiring it ensure Taiwan has the means to defend itself and to regard threats to the island as matters of “grave concern.”

Taiwan and China split in 1949 after a civil war and have no official relations but are bound by billions of dollars of trade and investment.

China has increased its pressure on Taiwan since it elected independence-leaning Tsai as its president. When Tsai refused to endorse the concept of a single Chinese nation, China cut off contact with the Taiwanese government.

U.S. congressional visits to the island have stepped up in frequency in the past year.