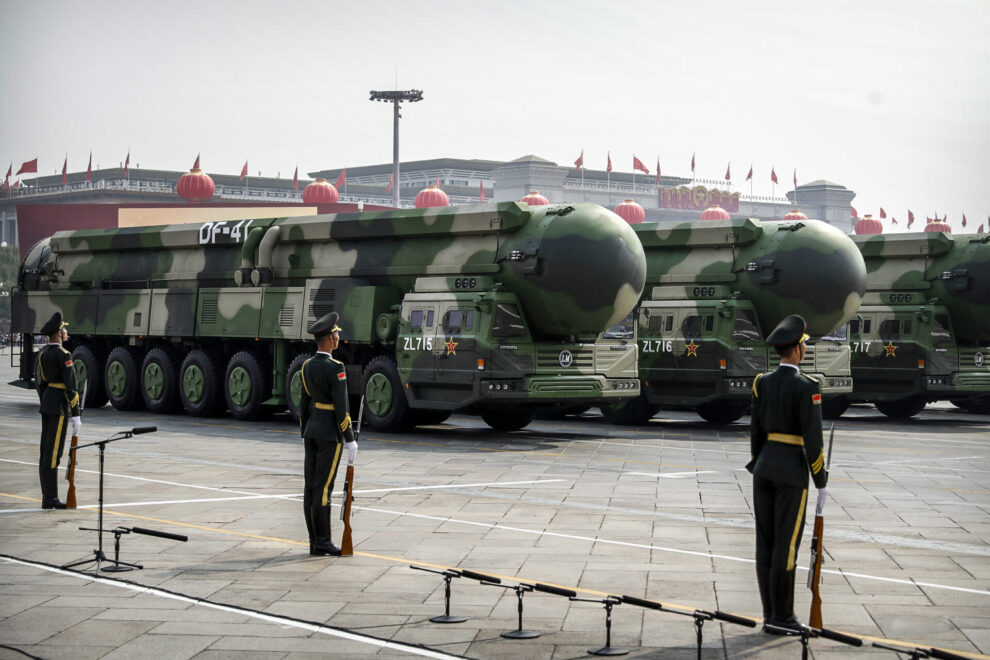 Congress is famous for thinking as far ahead as the next election. But if it wants to meet the scale and scope of China’s nuclear challenge to the world order, it must rise above its well-earned reputation.

China’s President Xi Jinping, in 2017, presented his vision of China becoming the world leader in a number of areas, including advanced manufacturing, science, economic strength and, of course, military power.

As part of this drive for supremacy, China recently doubled the size of its nuclear arsenal and is projected to grow much more. The questions now are: How high will it go, and what should we do about it?

Some analysts believe China might limit its buildup because it will not have the required fissile material for that many new weapons. Others say it’s “no time to panic” since China will not match U.S. nuclear force levels for more than a decade.

Some U.S. defense hawks, meanwhile, feel vindicated after their concerns about a Chinese nuclear “sprint to parity” — roundly mocked a decade ago — now appear justified.

In 1963, the U.S. nuclear arsenal was clearly superior to that of the Soviets, leading the intelligence community to assess that Soviets were not “attempting to match the US in numbers of weapons for intercontinental attack.” Five years later, when the Soviets had in fact gained parity with the United States in that area, the intelligence community thought that surely now they would be satisfied.

They weren’t. They continued growing their nuclear forces to such an extent that, in the 1980s, the United States began to fear that they would begin believing their larger nuclear force provided the necessary leverage to act aggressively around the world.

The United States paid for its underestimation of Soviet nuclear intentions with expensive crash nuclear weapon programs that became politically divisive and difficult to sustain in Congress.

It must not make the same mistake with China. There is a serious possibility that China’s potential drive to nuclear parity with the United States is just the first step towards an end goal of nuclear superiority. Xi himself stated that China’s mission is to have its military modernization “basically completed” by 2035 and to be a “world-class” force by mid-century. Those dates, when overlaid on China’s projected nuclear forces, present a disturbing picture.

In 2020, the Department of Defense estimated China’s nuclear stockpile would total about 400 warheads by 2030. Instead of taking 10 years, however, China took only one — it surpassed 400 warheads in 2021.

The Department of Defense now estimates China will likely have 1,000 nuclear warheads by 2030 and 1,500 by 2035. But these projections, like their predecessors, might seriously underestimate China’s ambitions.

Washington began its own nuclear modernization effort in 2010 but each replacement program’s timeline is measured in decades, making progress sclerotic. And since the United States did not anticipate China’s meteoric nuclear rise in 2010, the U.S. force risks becoming dangerously insufficient in the 2030s, if not before.

The United States can implement some significant stop-gap measures in the next few years, such as uploading additional nuclear warheads to intercontinental missiles and adding cruise missiles to deployed bombers.

But given Beijing’s long time horizon for nuclear competition, and lengthy lead times for nuclear weapon production in the United States, Congress must act quickly if it wants to have an effect by the 2030s. Congress requires the National Nuclear Security Administration (NNSA) to produce no fewer than 80 nuclear “pits” per year — the cores of nuclear warheads — by 2030. The NNSA will not make that deadline but even if it did, 80 pits per year is likely insufficient.

The plan is to eventually produce 50 of those 80 pits per year at the Savannah River Site in South Carolina but the huge complex could accommodate up to 125 pits per year, providing a valuable option for production expansion.

Xi Jinping has been explicit about his desire for China to meet and exceed U.S. capabilities over the next 30 years. As part of that drive, China is building a larger nuclear arsenal to enable its aggression. The United States must respond by strengthening its nuclear arsenal to better enable deterrence.