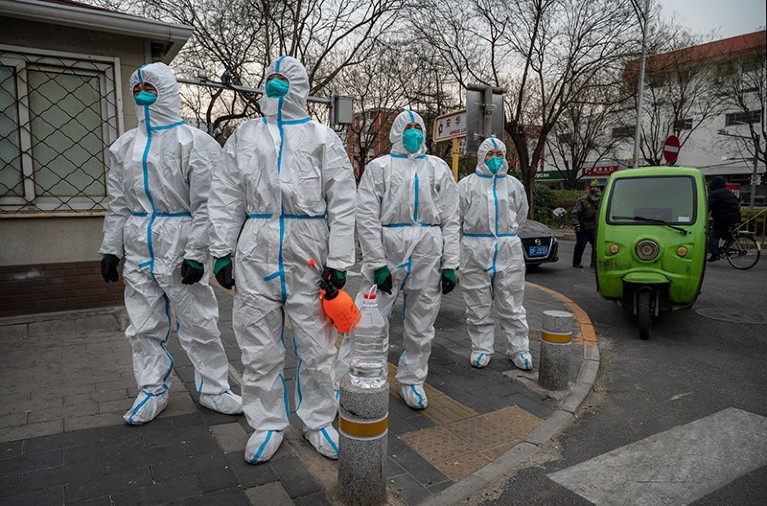 The Chinese government issued new guidelines easing some of its strict zero-COVID policies on Wednesday. Testing requirements and travel restrictions have been relaxed, and people infected with SARS-CoV-2 who have mild or no symptoms are for the first time allowed to isolate at home instead of in centrally managed facilities. But researchers worry the changes will lead to a rise in infections that risk overwhelming hospitals.

The guidelines represent a significant shift away from the strict policy that China has maintained for the past three years, which involved quashing outbreaks through mass testing, stringent lockdowns and border closures, say researchers. “It is a clear sign that China is moving away from zero COVID,” says Yanzhong Huang, a specialist in Chinese health policy at the Council on Foreign Relations in New York City.

The announcement follows protests in a number of cities against the strict lockdowns. Those led some cities to loosen some restrictions on testing and movement, but the new guidelines go further.

The changes move China “in the right direction”, says Adam Chen, a public-health researcher at the University of Georgia in Athens. They try to balance the need to protect the most vulnerable people from infection, while also reducing the economic and social harms of lockdowns, he says.

But the government hasn’t stated the goal of its new policy, which could create confusion, says Huang. “These measures will very likely lead to a messy and hasty transition process where local governments ditch all the zero-COVID measures without investing seriously in preparing for the transition,” says Huang, who would have liked to have seen the reopening happen in phases.

The latest national guidelines state that mass testing across entire cities is no longer required. They also take a more measured approach to lockdowns: instead of shutting down cities, the government says movement restrictions should apply to high-risk communities, buildings and households. People no longer have to show evidence of a negative test to travel between regions or access public transport and other venues, except for high-risk settings such as nursing homes. And the guidelines prioritize boosting the low rates of vaccination among older people.

But researchers say some aspects of the new rules are ambiguous and open to interpretation by local governments, including when and where to test people during an outbreak, what defines high-risk areas and how to manage them.

Furthermore, the guidelines do not lift testing and quarantine requirements for international travellers, which “doesn’t have a rationale if the objective is no longer zero COVID”, says Ben Cowling, an epidemiologist at the University of Hong Kong.

Many people in China live in densely populated high-rise buildings, where it will be difficult to limit transmission. Allowing people to quarantine at home will contribute to viral spread, says George Liu, a public-health researcher at La Trobe University in Melbourne, Australia. This could overwhelm hospitals.

The timing of the reopening is not ideal, say researchers. Winter is peak influenza season so hospitals will already be experiencing a rise in the number of patients. And many people will also be travelling across the country for next month’s Lunar New Year and spring festival, further increasing viral spread, says Xi Chen, an economist at Yale University in New Haven, Connecticut, who studies China’s public-health system.

The government needs to provide clearer guidance on how to handle a surge in infections, says Adam Chen. “It will test the resilience of the Chinese health system.”

China doesn’t have a strong system for primary medical care system, such as a network of general practitioners, so people go to hospital for mild conditions, says Xi Chen, who hopes more details on how the government plans to triage care will emerge in the coming days.

Without additional support, the eased restrictions might not help businesses to recover from protracted lockdowns or remove the social stigma attached to COVID-19, says Joy Zhang, a sociologist at the University of Kent in Canterbury, UK. “I’m afraid that the health and socio-economic risk will be passed on to individuals.”

Urgent guidance is needed on how to curb transmission during a surge, such as through mask mandates, work-from-home policies and temporary school closures, says Cowling. And given the reduction in testing, it is not clear how officials will track whether cities are approaching, or have passed, the peak of an infection wave, he says.

Researchers are concerned that hasty changes will not leave enough time to ramp up vaccination among older people. Currently, some 70% of people aged 60 or older, and 40% of those aged 80 or more, have received a third dose of a COVID-19 vaccine.

There is “serious vaccine hesitancy”, among older people, and a general lack of trust in medical professionals, says Liu. Many older people live in rural and remote areas so it will take time to vaccinate them, says Xi Chen.

The guidelines propose setting up mobile clinics, and training medical staff to address people’s safety concerns to boost vaccination. But they stop short of issuing vaccine mandates or introducing strong incentives for local governments to increase their vaccination rates, says Huang. Whether the inevitable rise in infections will lead to a spike in deaths remains to be seen. “The full impact remains to be unfolded,” he says.