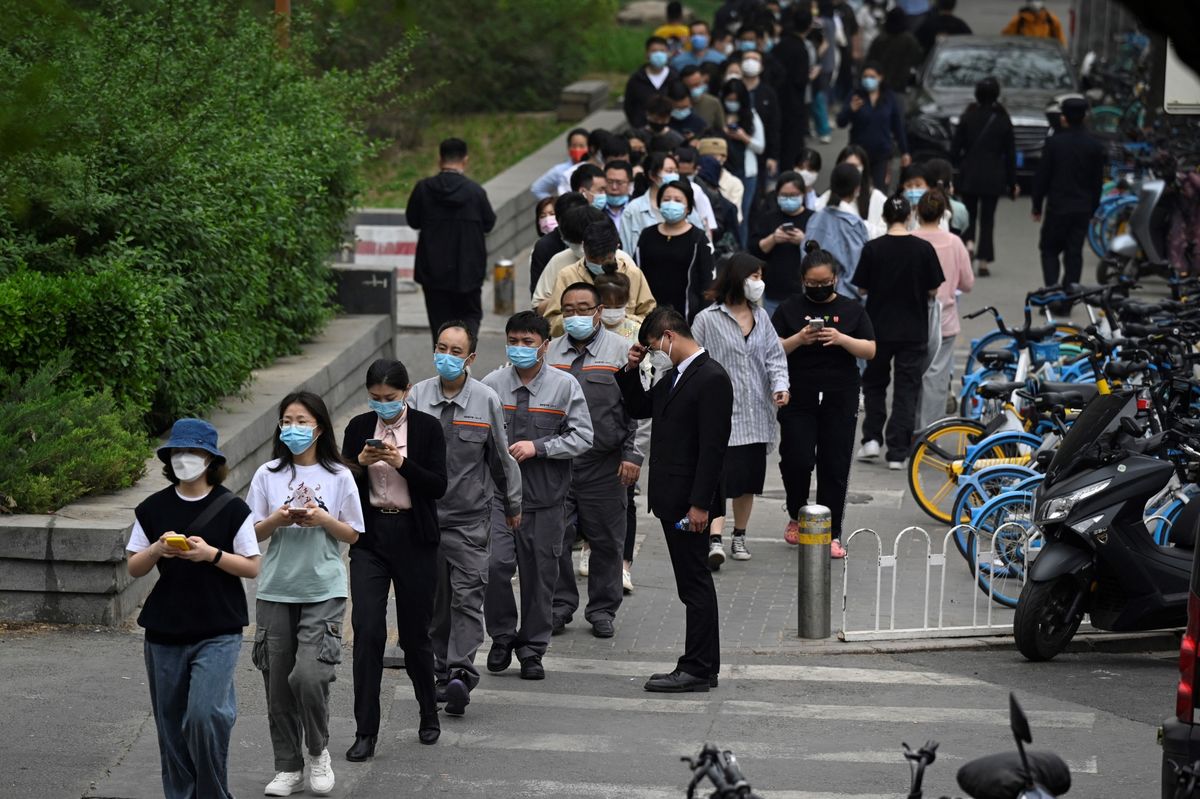 China is under-reporting coronavirus cases and fatalities, obscuring the scale and severity of the health crisis just as the world’s most populous country enters its deadliest phase of the pandemic, analysts warn. Official statistics on Friday revealed no new deaths and only 16,363 locally transmitted coronavirus cases in China, less than half the peak caseload reported last month.

That is despite a stunning U-turn over the past week to relax President Xi Jinping’s heavy-handed pandemic controls, which means the virus is certain to spread. The sweeping changes to Xi’s zero-Covid policy allow asymptomatic or mild cases to isolate at home rather than in centralised quarantine, and slashed China’s mass testing and contact tracing requirements.

The sudden reversal came weeks after Covid-19 cases hit a record high of more than 40,000 a day, with every region of the country reporting an Omicron outbreak.

Despite the official numbers suggesting the caseload had halved, Raymond Yeung, China economist at ANZ bank, said that on-the-ground observations indicated some cities, including Baoding, in the northern province of Hebei, already had “high infection numbers”. More big cities, he said, would soon endure similar levels of infections.

“Like Hong Kong, the actual infection data will no longer be informative. As the ‘official’ infection figures decline, the government can eventually claim their success against the virus,” Yeung said. The situation echoes the dearth of official information during the disastrous initial outbreak in Wuhan nearly three years ago. Local officials and analysts warned that the reduced testing, as well as gaps in reporting of both cases and deaths, would make it harder to assess the risk to the world’s second-biggest economy. “The behaviour of case numbers is very similar to 2020, where we had one [to] two weeks with genuine case numbers, before the veil was drawn,” said Rodney Jones, principal at Wigram Capital Advisors, an Asia-focused macroeconomic advisory group.

“We have no idea whether we will see actual case data again, and whether the sharp downshift in cases reflects reduced testing . . . or political management of the case data,” Jones added. A critical missing piece of information is the rate of positive tests, which is important for determining actual infection. Nor is the real-time effective R value published, depriving observers of a vital measure of the rate at which the disease is spreading. There are also discrepancies between Chinese regions in how cause of death is determined and the definition of “symptomatic”.

In some cities, including Shanghai, a chest scan is required before Covid diagnosis. Xi’s decision to loosen strictures has led to fears of an unparalleled wave of infections and a sharply rising death toll. Wigram has projected as many as 1mn deaths over the winter months. China has reported 5,235 coronavirus deaths, with the latest additions on Sunday. More than 4,600 fatalities were reported in the first few months of 2020 and about 600 during Shanghai’s lockdown in April and May this year. One provincial health official said deaths would “normally” only be recorded if a person tested positive before seeking medical attention. They added that many colleagues were questioning the veracity of the official death toll after authorities concealed fatality data in 2020.

“Those who present with symptoms but have not had time to be tested and die from an underlying disease, these would be missed,” the official said. An intensive care unit doctor in Guangzhou, a city in southern China, said the data’s usefulness was complicated by the fact that many seriously ill patients were avoiding hospitalisation. Others were unable to obtain the PCR test result required for hospital treatment because of reduced testing. Chinese officials and state media said the policy changes were designed to “contain the epidemic in a more science-based and targeted manner”.

Public health messaging has also intensified to encourage vaccinations among the nearly 90mn elderly Chinese who remain inadequately protected from the virus. However, public anxiety is increasing about the healthcare system’s capacity to handle a big rise in Covid cases and the discrepancy between the official narrative and reality. “We should address the problem — either report real figures or stop publishing them,” Hu Xijin, a former editor of the Global Times, a nationalist tabloid, wrote in a social media post, adding that disseminating “severely distorted figures to the public” was damaging the authority of official information.

Hospitals in Beijing have started running out of medical supplies, including ibuprofen and paracetamol, as health workers fight an outbreak spreading rapidly through the Chinese capital. Yet the Chinese capital reported just 2,654 official new infections on Friday for the day prior. Ben Cowling, a professor of epidemiology at the University of Hong Kong, warned of the risks of abandoning testing requirements and reporting cases inaccurately. “As testing intensity is reduced, it will be more difficult to maintain situational awareness of the level of infections in the community, and interpretation of case counts will be more nuanced,” he said.

Yanzhong Huang at the Council for Foreign Relations think-tank, noted that after the November surge in cases, there were “so many asymptomatic cases and so few severe cases”. “That is puzzling,” he said. “Does that mean they have a different way of counting Covid-related deaths?” Recommended Coronavirus pandemic China risks 1mn Covid deaths in ‘winter wave’, modelling shows Others maintained that after nearly three years, the costs of mass testing, coupled with China’s contact tracing system, had become unsustainable. As local government coffers dried up, the decision to depart from mass testing was essentially forced upon Beijing, said Sam Radwan, principal at Enhance International, a consultancy. “Beijing Social Insurance Fund Management Center has run out of money.

They’re having a hard time paying bills for the first time in a very long time,” Radwan said, referring to the capital’s agency responsible for funding health services. “That’s why you were seeing they’re shutting down testing booths before they’re removing the restrictions.” Additional reporting by William Langley, Andy Lin, Gloria Li and Eleanor Olcott in Hong Kong