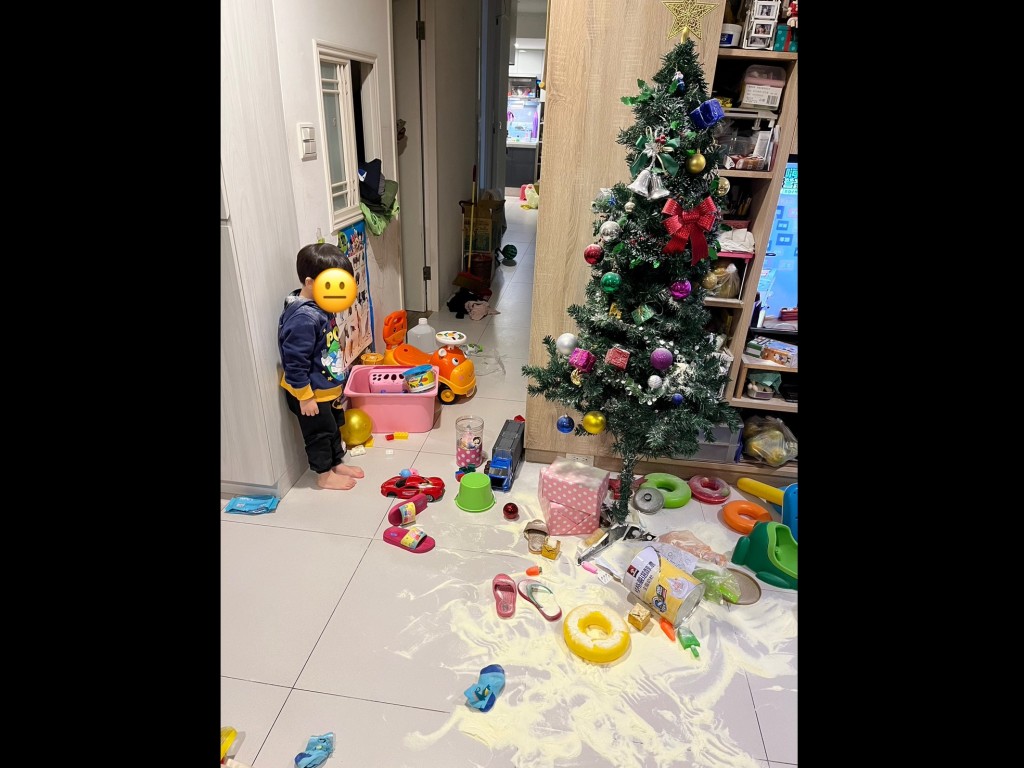 TAIPEI (Taiwan News) — A child got into the Christmas spirit on Wednesday (Dec. 21) by scattering an entire tub of powdered milk over his home’s Christmas tree, much to his mother’s grief.

Facebook user An I-hsuan (安亦萱) shared in a post that the incident happened soon after she finished putting up her family’s Christmas tree in the living room. “I looked away for just a moment before my misbehaving child was tossing the full fat milk powder I consume daily as food for my spirit all over the Christmas tree as though it was snowflakes …”

When she asked why he did it, the child replied, “Because there has to be snow on the Christmas tree.”

In a photo, the child can be seen in time-out mode, standing beside the scene of the “snowfall.” An admitted the powdered milk on the tree did resemble snow and that the tree looked “pretty beautiful,” and she enjoyed smelling the “milky aroma” while cleaning the floor.

“Even though it’s not baby formula, I still bought it with my hard-earned money!” And added. “It’s such a waste …”

In a hashtag, she revealed the Christmas tree was thrown out as a result of the incident. She also wrote in the comments that despite having cleaned up the mess, the living room floor remained sticky, which showed how difficult it was to clean up.

Some commenters on the post noted the creativity and cleverness of An’s child, while others worried the house would soon face an invasion of ants or cockroaches. Many offered cleaning tips, child safety advice, or their own accounts of similar stories.

My way to Go: Taiwan’s Go champion Hsu Hao-hung has world in his sights
Taiwan calls on BioNTech to cut out China as middleman