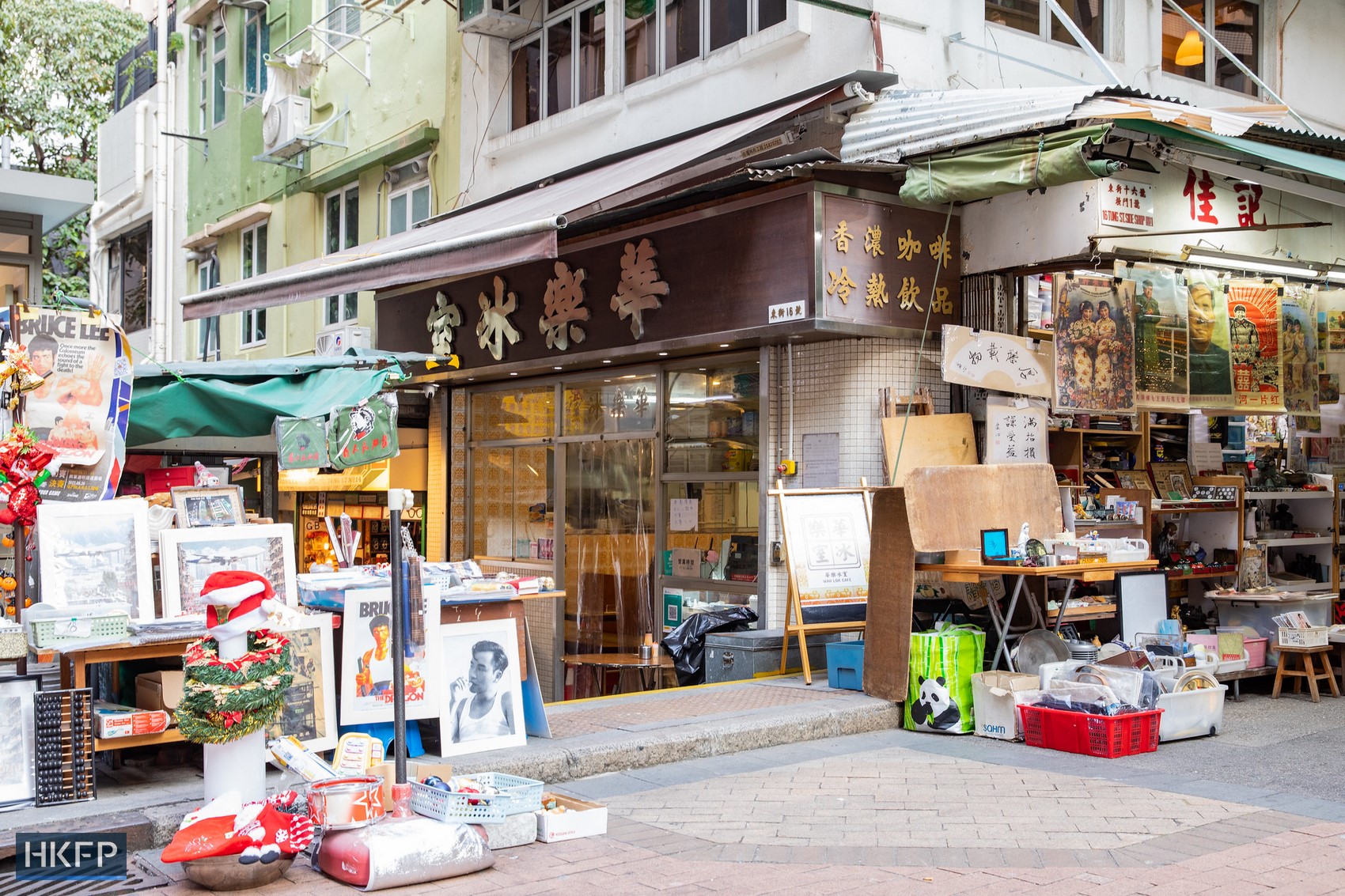 With walls covered in yellow and white geometric tiles and a storefront signage reading “rich coffee, cold and hot drinks,” Sheung Wan’s Wah Lok Cafe is one of a shrinking number of Hong Kong-style cafes striving to survive in a city where historical shops are gradually shuttering.

The eatery, founded in the 1940s, stands at the intersection of Tung Street and the quaint Upper Lascar Row. Its patrons sit just metres away from a stall selling memorabilia of the late Chinese leader Mao Zedong and posters depicting old Hong Kong.

On Wah Lok Cafe’s wooden tables, QR codes that take customers to the restaurant’s recently-launched Instagram and Facebook accounts. Fried pork chop with spaghetti, satay pork bun and Hong Kong-style French toast are among the iconic dishes cooked and served by a rare all-female team and showcased on the eatery’s social media.https://b688d88ed779f9c72868905c8a6d4133.safeframe.googlesyndication.com/safeframe/1-0-40/html/container.html?n=0

Traditional shops in Hong Kong have been trying to raise their online profiles in recent years, as the city has bid farewell to an increasing number of long-running businesses, including bakeries, cha chaan tengs, dim sum restaurants, herbal tea shops, stationery stores and more.

While some shops rely on second-generation proprietors to manage their digital presence, others have become more visible thanks to a growing number of pages that seek to document and conserve what they see as important cultural symbols of Hong Kong.

Among them is Hong Kong Historical Shops, a page founded by Ian Ma in 2018, which regularly shares photos and detailed biographies of businesses that began operating in the city in 1969 or earlier.

Ma, 40, told HKFP that the page usually features shops that are lesser-known and from different sectors, in the hope of broadening people’s understanding of the local historical shops landscape.

“Some previous books on historical shops focused on certain stores only – those so-called celebrity shops. This may give the general public a very stereotypical understanding of what Hong Kong old shops are,” said Ma, who works in the finance industry.

The page started off as a platform for Ma to share his nostalgia for shops at risk of shutting down due to a lack of successors, soaring rents and urban redevelopment plans. Four years on, Hong Kong Historical Shops – which boasts 15 contributors at present – has set its sights on a more ambitious goal of wielding its network to help struggling shops survive.

In September, the page shared a job advertisement for apprentices for bespoke tailoring shop Thumb Thimble. They also tried to help the famous Cheung Heung Tea Restaurant find new owners before the end of November, as the proprietor decided to emigrate. Despite their efforts, the Kennedy Town eatery – known for its mouth-watering egg tarts and rich milk tea – did not escape its fate, shutting down on November 30.https://www.instagram.com/p/CjaT9W2vhqy/embed/?cr=1&v=12

The experience of assisting old businesses find new blood has opened Ma’s eyes to the obstacles encountered by traditional shops. Some have complained that media coverage and public support only came they were “nearing death,” but Ma sees the potential of stepping up from this “burial-style conservation” if stores have better channels to inform people about their challenges.

“Some people only found out about the closing shops at the very last moment, but they were still willing to travel all the way there to show support. It shows that people do care,” he said.

Some shops told Ma that they had noticed more customers after being featured on his page. Wah Lok Cafe even put up a logo of Hong Kong Historical Shops at its shop entrance, with a QR code to promote the growing page.

Ma’s team does not escape controversies, however, especially when they write about old restaurants. Readers often expect the page to act like online food guide OpenRice when they introduce cha chaan teng and bing sutt, the administrator said, where only those with delicious food and great customer service deserve a mention.

A post about Mido Cafe in Yau Ma Tei – which closed in July after more than 70 years of operations only to reopen again last month – saw comments criticising the food quality, saying “it would not be regretful if this shop closes.” Some also called the restaurant a “blue shop,” referring to its supposed pro-government stance during the 2019 extradition bill protests, which often escalated into violent displays of dissent against police behaviour.

Ma said his team wanted to draw people’s attention beyond items on the menu and make the eatery a starting point for learning about the city’s history.

Mido’s cultural elements and physical structures should be preserved, the historical shop enthusiast argued, adding most people were unaware that the restaurant used to hold wedding banquets, where the bride and the groom would host separate meals.

“I think Hongkongers are not too mature when they look at the political stance of a shop. Even if a shop holds an opposite stance as them, if the shop manifests Hong Kong culture or is historically significant, there is no need to wish for it to close down,” he said.

Although he shares a similar goal of drawing public attention to historical shops, 21-year-old Michael Kan has chosen a different medium to capture their charms.

The architecture student at the University of Edinburgh uses paper and a pen to document the details of the ever-changing urban landscape in Hong Kong. Old shops, as an integral part of the city’s streets, often became the subject of Kan’s sketches. He has also turned them into designs for postcards and tote bags.

When Kan returned to his home city this summer after almost two years of being stranded in the UK because of the Covid-19 pandemic, he was shocked to find a number of shops he once sketched had either been torn down or replaced by other businesses.https://www.instagram.com/p/Cjftn5OoigE/embed/?cr=1&v=12

“These old shops are visual characteristics that are unique in Hong Kong. It is very hard to replicate… when they start to vanish, it may signify the demise of the broader culture that they represent,” the artist told HKFP.

Carrying on the legacy

In the hope of preserving the city’s heritage, Hong Kong Historical Shops is preparing to publish a second book about old shops and their little-known stories. The page also has plans to organise guided tours around the Central and Western district, subject to Covid-19 rules.

For page founder Ma and his close friends who are also passionate about historical shops, they have a grander plan for continuing the legacy – becoming owners of a historical cha chaan teng.

They made a pitch earlier this year but were unsuccessful after the owner said the group had little experience in the sector, and the restaurant would likely remain in a deficit. But it remains Ma’s dream to run this traditional restaurant one day, a place where people can truly feel the pulse of the city.

“We always say that we like the human touch. Well, they have it here,” he said.