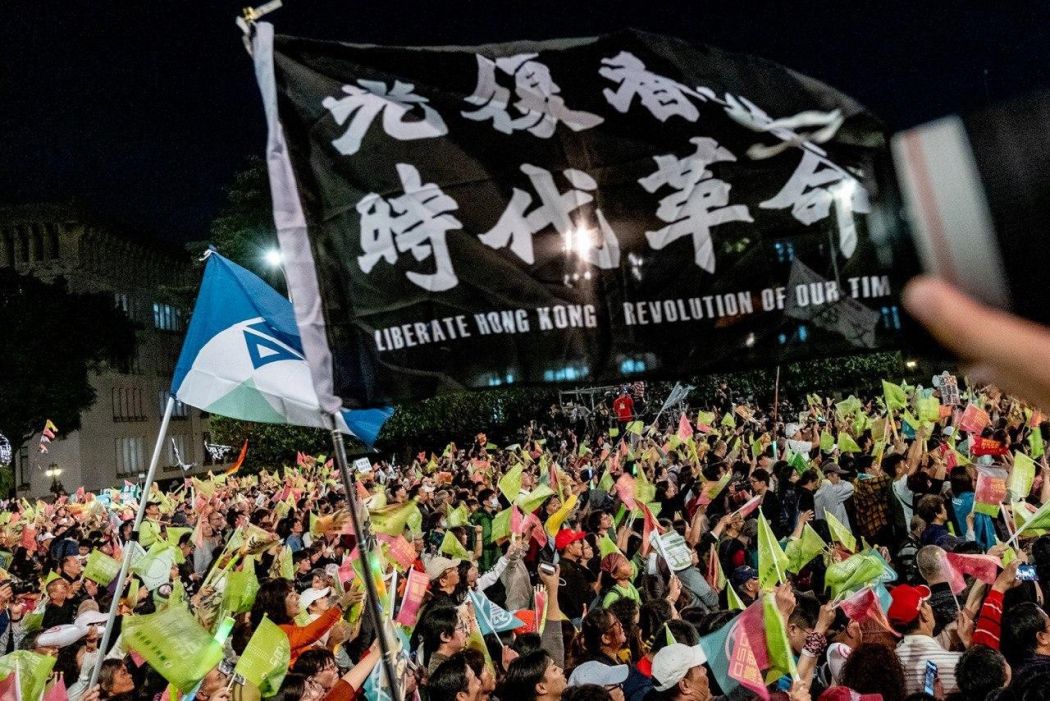 Since Wong Siu-yung opened a church for Hong Kong Christians in Taiwan last year, it attracted more than three dozen attendees. But in that time the only Cantonese-speaking church on the island has faced significant turnover.

A few congregants returned to their previous residence. But most of the 10 who departed moved to the United Kingdom.

“I watched them all give up and leave Taiwan,” Wong said. “Relocating for the second time in such a short period of time is very difficult.”

This week, Wong himself joined the exodus. The 48-year-old pastor boarded a flight Thursday to Nottingham, England, hopeful about making a new home more than 6,000 miles away. This wasn’t a journey Wong had anticipated when he left Hong Kong for Taiwan in July 2020. At the time, his involvement in the 2019 pro-democracy protests had made him a potential government target, so he decided to leave his homeland immediately.

Taiwan initially promised to provide “settlement and care” to thousands of Hong Kongers like Wong. But in the months since, the government has made it increasingly difficult for Hong Kongers to gain permanent residency, preventing many from working and settling on the island. Government officials fear that allowing Hong Kongers to resettle in Taiwan could provoke China and open the door to Chinese Communist Party (CCP) infiltrators.

Wong and his congregation have faced roadblock after roadblock: After selling their homes in Hong Kong, quitting their jobs, and pulling their kids out of school, they arrived in Taiwan to find the requirements to gain residency changed and their cases stuck in limbo. “Hong Kongers have fallen for [the Taiwanese government’s] great scam of the century,” Wong said.

Tired of the ongoing uncertainty, they’ve joined the growing group of Hong Kongers in Taiwan leaving for Britain, which has provided them a pathway to citizenship. In total, Wong knows of about 50 Hong Kongers who have embarked on this second migration.

Still, Wong says he sees God’s hand at work during his time in Taiwan building a close-knit church community, bringing nonbelievers to faith, and showing the shortfalls in placing his hope on a government—even a democratic one.

“Christians shouldn’t have an overly romanticized or naive view of worldly political systems,” Wong said. “Christians need to know their hope is only in God.”

After China tightened its grip on Hong Kong in June 2020 with a far-reaching national security law, many Hong Kongers seeking greater freedoms turned their sights toward Taiwan.

The self-governed island was a quick one-hour flight away from Hong Kong, which would allow family members to visit. The climate, culture, and language were familiar: Although Cantonese is spoken in Hong Kong and Mandarin in Taiwan, the written language is the same, and Mandarin is taught in Hong Kong schools.

Most importantly, democratic Taiwan had publicly welcomed Hong Kongers fleeing the city. As a result, more than 27,000 Hong Kongers arrived in Taiwan on temporary visas between 2019 and 2021, according to Taiwan’s government.

Wong decided to leave Hong Kong shortly after helping to publish a statement declaring the Hong Kong church’s allegiance to Jesus over the Hong Kong government. A state-run newspaper claimed that he and the other organizers had incited secession and subversion under the newly enacted national security law. The punishment for those crimes was up to a decade in prison.

Huang Tsung-sen, a Taiwanese pastor well known for his support of the Hong Kong prodemocracy protests, encouraged Wong to come to Taiwan. His church, Chi-nan Presbyterian Church in Taipei, needed a Cantonese-speaking pastor for a group of Hong Kongers who had started attending.

Wong took him up on the offer. As more students and families moved to Taiwan, the church grew from 30 to 100 people within several months. It was there that Hong Konger Florence Cheang professed faith in Christ and was baptized. Although she has shared the frustration of finding herself in immigration limbo in Taiwan, she has been grateful for the church’s support. “I can share with them about everything,” Cheang said. She noted that without them, “I dare not imagine what my situation would be, being here alone.”

Yet Wong wasn’t able to make any long-term plans in Taiwan. He arrived in Taiwan on a special visa given to those who face persecution in Hong Kong. Although this allowed him and his wife to stay in Taiwan, they weren’t allowed to work or access Taiwan’s national health care. After six months, he applied for a religious visa typically used by Buddhist monks, which allowed the couple to stay three years and access health care but still didn’t allow them to work.

Wong preached on a volunteer basis both due to his legal status and because the Presbyterian Church in Taiwan (PCT) required their pastors to graduate from the denomination’s seminaries. To make ends meet, Wong preached and taught lectures on an online ministry to Hong Kongers called Glorious Worship.

Tensions began to build between Wong and Chi-nan church as he began to realize the Cantonese congregation wasn’t treated as an official part of the church. “We felt more and more that in the church, not everyone was like Pastor Huang in supporting Hong Kongers,” Wong remembered.

So the pastor decided to start an independent Hong Kong church in Tamsui, a seaside district 15 miles north of Taipei where many Hong Kongers now reside.

Supporting exiled Hong Kongers is a sensitive topic in Taiwan’s churches. Congregations are made up of members with diverse political beliefs: Some support Hong Kong’s prodemocracy protests while others side more with China. In order to prevent conflict, most churches skirt political topics.

Due to these concerns, Wong struggled to find a local church willing to rent its building to this new church plant. Some turned him down while others ghosted his requests. Wong brought up his search with his professor at the PCT seminary where he was taking classes, and the professor reached out to a friend who pastored a church in Tamsui. The pastor agreed to allow Wong’s new church to meet in their building on Sunday afternoons. After delays due to a COVID-19 outbreak in May, Hong Kong Church in Tamsui held its first meeting in September 2021.

Wong found that in a short amount of time, this community of Hong Kong transplants had grown closer than the church he had pastored in Hong Kong for 20 years.

“Even though [members of my previous church] knew each other for more than a dozen years, we felt that when we are in a small group, we can’t speak frankly,” Wong said. “If we speak what is in our hearts and we’re with people from a different camp, we would start to argue.”

But the Hong Kongers who come to Hong Kong Church in Tamsui had left their homeland for the same reason. In sermons, small groups, and prayers, Wong and his copastor Hung Kwok Him could talk about their homeland’s current situation and members could finally speak openly.

Kat Wong (no relation), a former member of the church, agreed, saying that the proestablishment contingent at her church made it hard for her to openly admit that she supported the protests.

“Here, everyone can speak openly and freely,” she said. She’s glad that the pastors’ sermons incorporate Christian faith in everyday life. “I agree with Pastor Wong who says Christians need to speak out about injustice; we can’t say, ‘Let’s not discuss these unjust things.’”

Kat Wong believes another aspect that binds congregants together is their shared experience of leaving their homes and struggling to gain residency in Taiwan. Kat Wong, who had worked as a nurse in Hong Kong, was initially told by Taiwan immigration officials that if she came to Taiwan on a professional visa, she would just need to stay in the county for one year before she could apply for residency.

Yet during that year she was faced with contradictory rules: Her visa didn’t allow her to work, but the government wanted proof she was contributing to Taiwan. So she took pottery classes, volunteered, and took trips to learn about Taiwan’s history. According to the immigration official in charge of her case, that wasn’t enough. If a local company would hire her, they could sponsor a work permit, they told her.

So through a Taiwanese friend, she found a newly opened home for older adults that would be willing to hire Kat as she had experience working with that demographic. Yet the Ministry of Labor claimed she couldn’t work in the home because she didn’t have a Taiwan nursing license. When the home agreed to let her work in a management position, officials again countered that it wouldn’t work as the visa she entered Taiwan with didn’t state a background in management.

“If I lived here another year, I’m not certain that I would get residency,” she said. In March, Kat Wong moved to Manchester, England, to live with her son.

Wong’s own attempt to get permanent residency through a professional visa resulted in numerous changes and contradictory requirements. At one point the immigration official asked if he had won any awards in the past year to prove he contributed to Taiwan society and listed as an example “the Nobel Prize.”

As it became clear Hong Kongers were not welcome in Taiwan, Wong began to change the way he viewed his role as the pastor of a Hong Kong church in Taiwan. Initially, he wanted to help his fellow Hong Kongers settle in their new home and find ways to serve their local community. Now he sees the church as a way station for travelers passing through.

Wong made it a point to give each congregant leaving Taiwan a proper sendoff and blessing as many weren’t afforded that luxury when they quietly and swiftly left Hong Kong.

Wong said that after arriving in Nottingham, he plans to find a “normal” job, noting that he’d even be willing to work at McDonald’s. He’s dealing with PTSD from the tense past year in Hong Kong and weariness from the uncertainty in Taiwan. Hung will take over pastoring Hong Kong Church in Tamsui.

Wong sees God’s hand in the past two years in Taiwan, even if it didn’t end up as he expected. He says that God taught him not to romanticize any worldly political system but that his only hope is in God.

“In the past few years, Hong Kong faced many unhappy things,” Wong said. “So we want to go to Taiwan, US, Canada, UK, and we bring with us this false idea that everything we experienced in Hong Kong was bad, so the opposite must be good.”

Yet after living in Taiwan, Wong learned that even countries that hold up noble ideals like democracy and human rights have their weaknesses. “We need to better understand how political systems align with our kingdom values and areas where it’s very different,” he said. “When we face a political power, we need to be clear headed and keep our distance.”