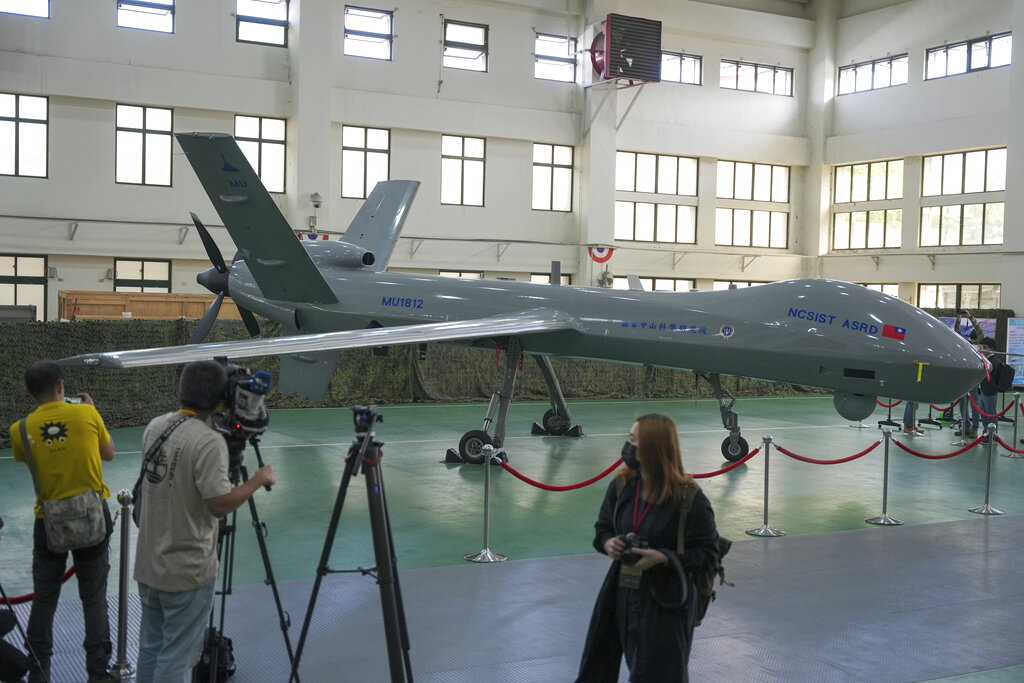 TAICHUNG, Taiwan — Taiwan displayed its self-developed drone technology Tuesday, amid rising concerns over China’s threats to use force to assert its claim to the self-governing island republic.

The National Chung-Shan Institute of Science and Technology, which develops military technology, offered a rare look at the Chien Hsiang drone designed to destroy enemy radars, and other unmanned combat aerial vehicles.

A dozen of the single-use drones, officially termed loitering munitions, are carried on a truck. Launched with a built-in rocket, they are guided by a propeller engine before crashing into their targets.

Any country that is “confident in itself” will come up with strategies and develop defense technologies, said Chi Li-ping, director of the institute’s Aeronautical System Research Division.

Unmanned combat aerial vehicles are “a future trend,” Chi said. “This is why we are doing research about it and laying out some strategies.”

Taiwan’s army began taking delivery last month of the first of 100 helicopter drones ordered from the institute. Chi emphasized their importance in relaying images to the army’s command and communication systems for analysis and forwarding to combat units.

Taiwan has also developed the Teng Yun, which resembles the American MQ-9 Reaper unmanned aerial vehicle and can stay aloft for up to 24 hours.

While the U.S. and others have long used drones in the targeting of alleged terrorists and others, they have proved especially important in the Russian war on Ukraine. Moscow has imported drones from Iran while Kyiv has found success with inexpensive Bayraktar TB2 unmanned aerial vehicles from Turkey, which carry lightweight, laser-guided bombs.

China, meanwhile, has forged ahead with developing its own drones, some models of which have been exported.

China upped its military threat against Taiwan in August in response to a visit by U.S. House Speaker Nancy Pelosi to the island. It shot missiles over the island and held live-fire military drills in six self-declared zones in what appeared to be a rehearsal for a potential blockade and invasion of the island that would almost certainly draw in Taiwan’s chief supporter, the United States, along with American allies including Japan and Australia.