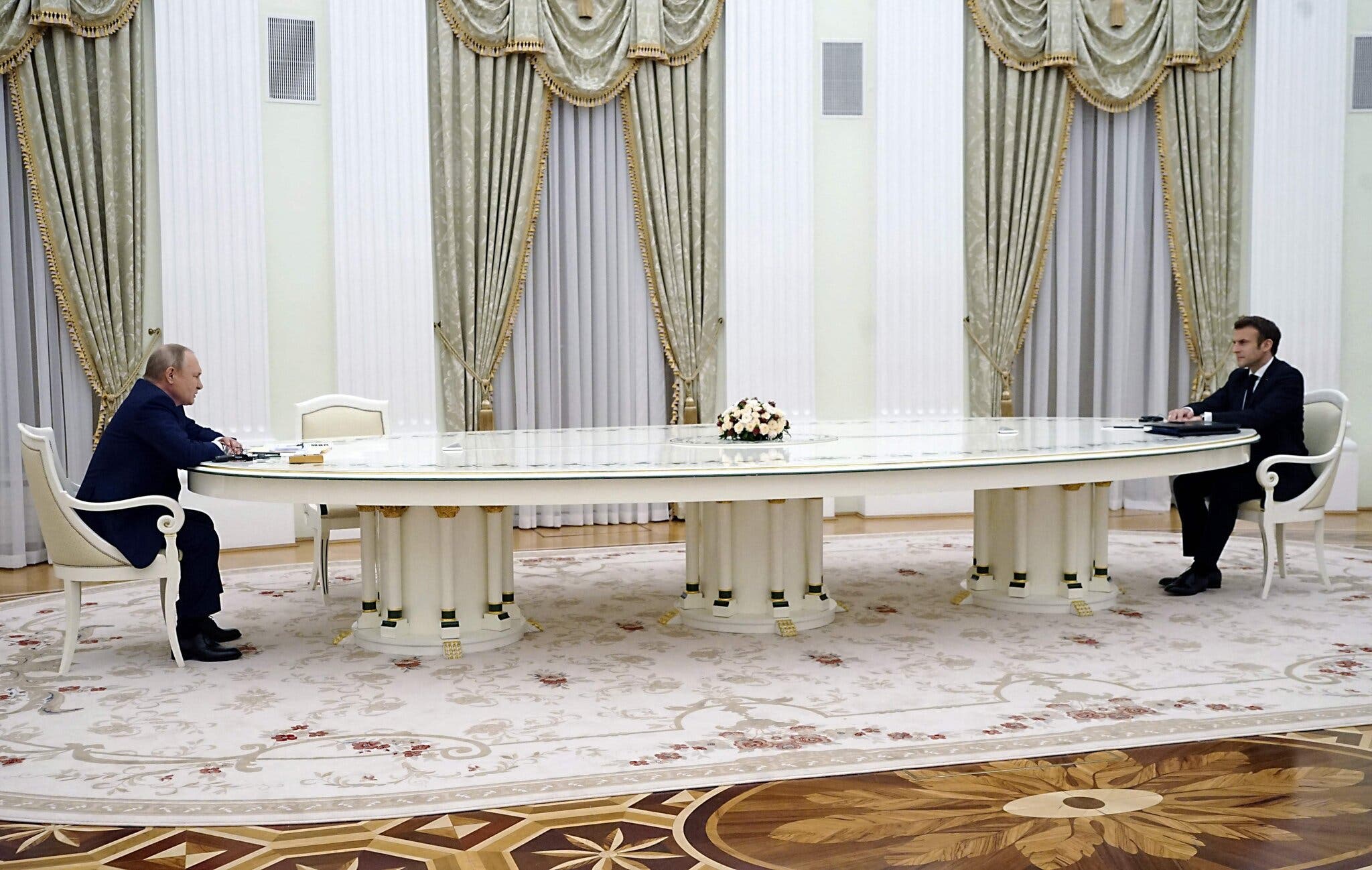 French ambitions or Macron’s folly going to Moscow. The problem France is not in charge.

Paris (8/2 – 50). A picture says a thousand words, so an old ad slogan said. If table space is a methaphor of the division of Europe and the Russian no better picture can describe the current mood in Moscow. A Russian observer summarized it as, “Negotiation, yes, but Buddies, hell no. We are way far away from trusting the Europeans or the U.S.”.

In Europe observers applaud the efforts by French president Macron. But critiques argue its all just political theatre to shore up Macron’s re-election changes later this year. But these voices miss the beat. The threat of war is real and the Russian administration for some time now has warned the west that it had ignored the Russian security demands.

The mainly western media is full of painting the Russian “aggressors”. Russia will incorporate the Ukraine, the omnious warning at the Munich Security conference, Putin’s 5,000 word write up on the Ukraine and subsequent the NBC interview which cornered the Russian president. A hundred thousand or more men deployed nose to nose with the Ukranians did not help to inspire confidence in the west either. Regardless we are on the verge of war.

Vladimir Putins grievances were quickly dismissed by the western outlets. And the response is a textbook response. “Russia is only days away from launching an attack”, is one of routine outcry by the US media outlets. Russia retorts with “western hysteria”.

The European and U.S. response is finger wagging, threat of sanctions, and some limited deployment of U.S. forces to bolster the alliances. Russia might have underestimating the resolve by the Europeans and the U.S. but war to protect the “motherland” is upon us. And the Europeans, following the U.S. model, overestimate the impacts of sanctions. The only thing that sanctions have achieved is resetting the strategic relations with China, the middle east and Africa.

What many experts overlook is the internal Russian perspectives and the economics of the Ukraine which has been long a thorn in the Russians side since the EU corporate take over. The value of black soil in the global trade is nicely explained in the video below. Yes, and if nobody has read history, the Ukraine is of strategic importance to Russia. Period.

French officials at briefings spoke about the “Finlandisation” of Ukraine, a form of neutrality, an idea that has been floated before.

Finland, which shares a 830-mile (1,335km) border with Russia, chose in 1947 not to become a Nato member and signed a “friendship treaty” with Russia that included limits on the size of Finland’s army, and other restrictions on its sovereignty.

The so-called Paasikivi doctrine – named after Juho Kusti Paasikivi, its president at the time – nevertheless created a political consensus in Finland until the issue was ironically reopened by the current Finnish president, Sauli Niinistö, concerned by what Russia was doing to threaten national sovereignty.

The U.S. has not significantly upted to go the military route, despite the Baltic states, Poles and others call for a greater role in European affairs. But the mood in the United States is not entirely set for conflict in Europe. After all the political message is to ‘hope to avoid a new European war’.

Going again to war after the Afghanistan fiasco the reality is that the Ukraine is not a member of NATO hence the support for the Ukraine will turn into a proxy war scenario. The appetite for large military adventures are not on the European or Russian agenda either.

So what does the Russians want?

Moscow’s concern remain on the table. In fact it is unchanged. Ukraine is a security buffer but more so it is an important economic contributor is hampered by the narratives that exist within the power elites and academics that suddenly re-emerge after a 30-year hiatus and claim some knowledge.

It only defeats the fact that the majority of the latte-drinking, think-tankers were not born yet and have had Russian studies as a side thought.

The assumptions that Moscow are anti-democractic, want to reinstall the Soviet Union stems from the circular analysis that disregards, as usual, the Russian perspective.

From the Russian perspective, it has been painted as a 20-foot monster that influences the elections in the great United States of A. Many Russian are in awe of the power Moscow possesses. It only gives critiques of the western democracy oxygen that Russia is on the path to power.

After all, if the Americans shaking in their boots over election influencing that old Mother Russia must be great again. The Russians warned so many times the Americans and, really anyone in the west for that matter that the Putin administration had enough. The division over avoiding war is evident by Dimitry Peskov who argued,

“France is a leading country in the EU, France is a member of Nato, but Paris is not the leader there. In this bloc, a very different country is in charge. So what deals can we talk about?”

It is also a sign how fragile and insecure the United States has become. Insecure about itself, deeply divided over its role in the world. The over amplification of the Russian threat undermines U.S. confidence and this in itself is the success of Russia’s hybrid strategy. Defeat the enemy without firing a shot.

This is not a fear of democracy. After all Putin is the post-Soviet product of democracy but the instability democracy brings. Viewed from the Russian lenses, Americans preach democracy, but censor a sitting president, right or wrong, with a ban exercised by a beared dude owning twitter. It preached all out presence but than on a whimp pulled the plug on Afghanistan, leaving the rest to sort out the mess.

Preaching democracy is one thing, owing it another. Moscow has continuously pointed out the hypocrisy of the reformating of the old-East West divide. Moscow is fearful of the instability the neo-leftist in the West have created. After all, Putin and the security services know the chaos the new actors create once unleashed.

In Belarus, Myanmar, Africa the Europeans and the U.S. trying to dominate the space. Syria was a turning point for Moscow as was Afghanistan. Both left the countries in shambles, tens of thousands of childrens killed or displaced that forced Moscow to intervene and rebalance countries it not necessarily wanted to get involved in the first place.

The U.S. foreign policy is consistent only at one aspect. Become like us, or else. The camels hair broke after the 2014 Maidan unrests. Belarus was the next on the target list. Since than and the NBC interview the Russian tempo increased to formulate security guarantees from the west.

Moscows grievance is that the West has not paid sufficient attention to Russian security demands in the recent past. Putin has not always been opposed to NATO. For more than for two decades, Moscow has requested that Russia must be an equal partner in the post-Cold War security architecture.

And for more than two decades Moscow was belittled and ignored or told only the way of the U.S. is the way to go. A decline rapidly followed.

Putin’s speech in Munich was remarkable in a few aspects. Putin said,

So much for Russia being a declining power. Taken his argument into account Russia economically realigning itself with China, Brazil and India makes more sense taking geography into account that Russia begins after the Ural that separates Europe from Asia.

Support for an integration of Russia into Europe was once relatively strong. Northstream-2 and other economic integration efforts aside Russians always considered themselves as Europeans. But since the collapse in 1991 and the birth of today’s Russia efforts were an uneasy trust with the Russians. Too many of the post-world war 2 generation remembered the final days of the Russia red army slaughters on the eastern front.

But ignoring the Russians is a strategic mistake. Russia is part of Europe, like or not, and needs a European solution suitable to the eastern members of the European Union and NATO and ensures the security of the Russian Federation, even if former Clintonian followers of Hillary’s progressive visions do not like it.

One thing is clear. Speaking after talks with Ukraine’s president, Volodymyr Zelenskiy, in Kyiv, Macron said Putin had made clear during discussions on Monday that he would not be the one to escalate tensions. The standoff could take months to resolve, Macron added.

The Russian and Ukranian leaders exchanged barbs on what is the political solution.

In the meantime on Tuesday, six Russian warships and a submarine passed through the Dardanelles strait, heading towards the Black Sea from the Mediterranean. The Russian vessels, landing ships used for amphibious assault, began arriving in the Black Sea on Wednesday. The EU foreign policy chief, said the arrival of the ships, adding to Russia’s already substantial firepower.

The Kremlin says Zelenskiy’s government needs to recognise pro-Moscow separatists in the eastern territories of Donetsk and Luhansk. Kyiv insists the separatists need to disarm before any political solution can be found, and officials believe implementing the accords could lead to the collapse of the Ukrainian state.

Asked about Ukraine’s reluctance to implement the Minsk accords, Putin had responded on Monday night with a sinister-seeming phrase: “Like it or not, you’ll have to tolerate it, my beauty.”

Switching to Russian and addressing Putin directly on Tuesday, Zelenskiy said Ukraine was indeed “tolerant” because it was not replying to Kremlin provocations.

It was not clear whether two days of intense French diplomacy had brought about modest concessions by Moscow, as Macron intimated, or nothing of the kind. French officials said Putin had pledged not to carry out any new “military initiatives”, after six hours of frank talks with Macron.

After all staring down the barrel of the gun, as history has taught us, has not solved any of the old grievances with Moscow only causes more young men and woman to be buried in the soil of Europe. So the French presidents effort to try to create a solution for Europe should be supported. 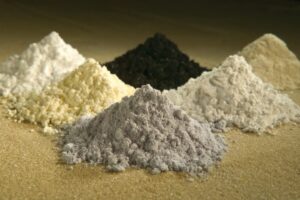