How to deal with Russia 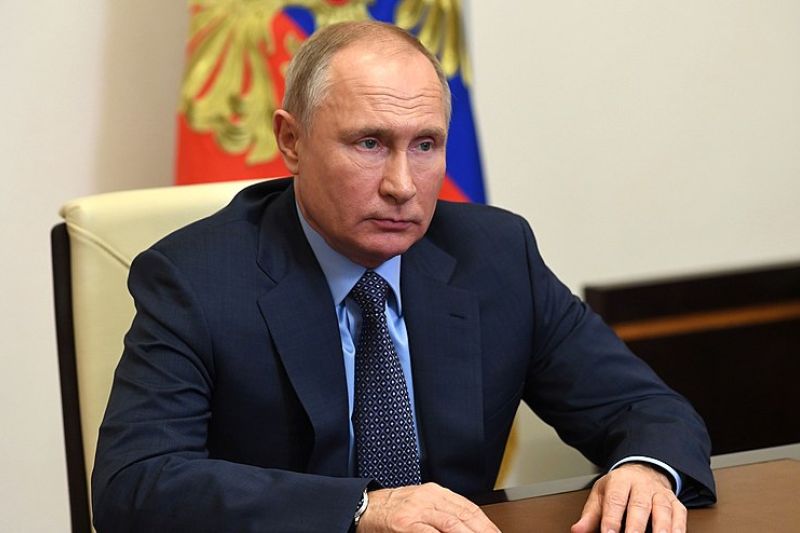 The West and Russia are not at war, but they are engaged in a warlike confrontation. In Moscow’s eyes, the ultimate enemy is NATO and “decadent” Western culture. Russian President Vladimir Putin believes his country is no longer European, but a civilization apart. He complains about victimization while brutally attacking Ukraine.

What started as a blitzkrieg has turned into a war of attrition that could go on for months, if not years. Presidential elections in the United States and in Russia – both in 2024 – will possibly affect the course of events.

The Kremlin has unintentionally provoked another enlargement of NATO. That makes reaching its other goals imperative: recognition of Russian Crimea and independence for Donetsk and Luhansk, and a land bridge to Crimea (and possibly Transnistria).

Should President Putin prevail in Ukraine, his next steps are easy to guess.

In its occupied territories, Russia is creating faits accomplis. It introduces its currency and legislation, Russian administrators and television, Russian as the official language, as well as Russian curricula in education. Where Moscow’s forces are entrenching themselves, Ukraine will find it hard to dislodge them later.

Putin is a symptom, not the problem

Russia’s self-image as a chosen nation with an imperial calling predates President Putin. It was a serious error to see the revolutionary changes of 1917 and 1991 as negations of the past. Under the surface, the same mentality endured.

To expect that Russia will revert to a liberal regime like that of former President Boris Yeltsin once Mr. Putin is out of office amounts to wishful thinking – and so do rumors about the current president’s failing health. The West will have to reckon with either President Putin or a like-minded successor for years.

Mr. Putin’s position is unassailable. There is no vice president; there is nobody that could depose or impeach him. He keeps opposition tightly in check and prevents any serious challenger from running against him. Election results are determined not by those who vote but by those who count the votes.

The tsarist and Soviet past cannot be defined by Moscow alone. It is a past shared with other countries, whose perceptions differ greatly from those of the Kremlin.

He has abolished institutional checks and balances. There is no structure like the Politburo, where opponents had a voice and influence. The Duma is a gathering of puppets, their strings firmly in the president’s hands.

Hoping that President Putin will be toppled is another form of wishful thinking. Assassination is extremely unlikely. Reports about troops refusing to obey orders do not presage mass mutinies. There is no charismatic leader who could fan sporadic sparks into a wildfire engulfing the entire nation.

There is still some subdued opposition, but it is confined to the intelligentsia in the cities. Most people in rural areas, the working class and people working for the government support Mr. Putin. It is extremely unlikely that mass protests will remove him from the Kremlin.

President Putin controls the media. Independent or foreign news is suppressed. The educational system propagates his ideas about history, namely that Russia is the legitimate heir of tsarist Russia and of the Soviet Union. Prominent journalists (Dmitry Kiselyov, Vladimir Solovyov) and the Russian Orthodox Church (Patriarch Kirill) parrot his opinions.

These trends in Russian society are not President Putin’s work, but he has reinforced old traditions. Laws are made at his behest and are interpreted according to his demands. Subservience is more important than competence. He runs several close-knit networks of patronage – the bedrock of his power. Russian society is bound together by ties of personal loyalty, not official responsibility. It is permeated by violence and a cult of callous masculinity.

The West has imposed sanctions to economically undermine Russia’s military strength. The results are disappointing. The exchange rate of the ruble is high, and Russia is amassing surpluses in foreign trade. True, Moscow has defaulted on foreign interest payments, but not because it ran out of money or because it repudiated that debt. Its gross domestic product is expected to shrink by about 10 percent by the end of the year. But sanctions also affect countries that impose them. Germany’s growth in 2022 will be 1.8 percent instead of 4 percent; it fears a recession in 2023.

Oil is being rerouted to China and India. Gas is more difficult to diversify. Still, sanctions push up prices, but they rarely choke trade flows. The Soviet Union was cut off from global markets. Today, Russia can turn to China, India, Iran, South Africa or Brazil.

Imposing sanctions is easy. It is much more difficult to find consensus as to when and how they should be lifted. President Putin could play off one Western country against another. He could cut gas supplies to Germany through Nord Stream while continuing to supply Hungary, Slovakia or Austria, driving a wedge into the European Union.

Sanctions hurt third parties and cause extensive collateral damage. If energy and food prices skyrocket in developing countries, causing bread riots and fuel shortages, political pressure from these countries will be directed primarily against the West.

Sanctions have never forced a government to revise its course in vital questions of national security. From 1916-1917, Germans had to forgo meat because of a blockade. The political effect was a reinforced feeling of a shared destiny as a nation.

The Russian government is awash with money. It can print rubles, creating inflation that is typical of wartime economies. This can compensate for most of the economic damage, allowing the state to extend its control. War requires war measures. Russia’s economy will come under stricter government control; targets set by the state will squeeze out market mechanisms.

Only in the long run will Western sanctions affect Russia, particularly in areas where high-tech goods from the West cannot be substituted (aviation, automobiles, IT hardware, telecommunication). But these effects will come too late to influence the Kremlin’s invasion of Ukraine. Russia can sustain a long war. Ukraine is slowly bleeding to death. Its infrastructure and economy are in ruins – and how long can the morale of its soldiers endure the slow, but the seemingly unstoppable advance of Russian forces? The outcome of a blitzkrieg is decided by stocks and reserves, whereas a war of attrition is decided by production potential. As long as Western support continues, this will favor Ukraine. But how long can the country endure socially, economically, and psychologically?

How to confront Russia?

In December 2021, Russia presented the West with a list of demands. They would have reversed what had been achieved in Europe over the past 25 years. Moscow sought to reestablish a Russian sphere of dominance and denied Ukraine’s right to exist.

Should President Putin prevail in Ukraine, his next steps are easy to guess. After the demise of Alexander Lukashenko, Belarus would be annexed. The arguments used against Ukraine could justify invading Kazakhstan. Finally, Mr. Putin might fight for a corridor to Kaliningrad. He would have to move swiftly – once Western Europe weans itself off Russian gas and once the rearmament programs bear fruit in five to 10 years, his position will be much weaker.

Through its aggressive rhetoric, though, Russia is alienating its partners. Azerbaijan has terminated a friendship treaty signed days before the invasion of Ukraine. Countries in Central Asia are rapidly building ties with China.

The West is confronting a fascist (see factbox), jingoistic Russia that is choosing military domination, national grandeur and triumphant glory rather than trade and the rule of law. Material and financial interests are secondary. The ambition to be an invulnerable global power has priority.

The term “fascism” has now been mostly stripped of its meaning through its indiscriminate use as a battle cry to defame political opponents. It is used here as shorthand for many features that the Putin government shares with those of Mussolini and Hitler:

Russia’s strategic advantage is its unity. The West’s weaknesses are its divergent, sometimes contradicting interests. Russia plays on Western fears of nuclear escalation, assuming that Western societies will be unwilling to suffer serious sacrifices as the war drags on.

A new phase of containment looms, entailing strong deterrence, anticipating Russian advances and nipping them in the bud. There had been hints of President Putin’s intentions as early as 2011 and 2012. Tragically, they were ignored.

By invading Ukraine, Russia has broken all rules of international law. It has scrapped multilateral and bilateral treaties with Kyiv. It is using weapon systems that are outlawed. Its rhetoric is stoking hatred, dehumanizing the opponent and turning reality on its head.

President Putin cannot be trusted to keep future agreements. The only security guarantee will remain an effective military counterforce. Ukraine will become a heavily militarized region with an eastern border like the one that divided West and East Germany, a heavily guarded fence recognized as neither legitimate nor legal, with an unprecedented concentration of troops and weapons on either side. Effectively, whatever is left of Ukraine will be part of NATO. It makes no sense to offer Kyiv European Union membership without including it in NATO. Reconstruction requires a safe and secure environment. Wherever an armistice line will be drawn, it will likely turn into a permanent frontier like in Korea or in the Middle East. Demilitarization would be tantamount to Ukraine falling irredeemably into Russia’s orbit.

Russia will remain Ukraine’s neighbor. Without Moscow’s participation, reconstruction and economic recovery in Ukraine will remain precarious. The Kremlin will still be able to disrupt sea lanes connecting Ukraine with world markets, and will remain able to keep Kyiv under the permanent threat of attack. This calls for a minimum of pragmatic mutual understanding.

Over the years, Russia will regress economically and technologically, making its leaders more paranoid. The situation in the Arctic could escalate as a result. The new naval doctrine unveiled on July 31 claims that Russia is a “great, naval power with global reach” and highlights Russia’s ambitions in the Arctic. The Kremlin will seek to gain influence in countries that distrust the West like China, Iran, Pakistan and some Arab countries.

The world is facing a new Cold War against a richer, more powerful Russia. Russia and China bestride the Eurasian continent, the proverbial heartland of 20th-century geopolitical theory. They are both revisionist nations pursuing declared aims of conquest and changes to the international order. Their armed forces combined could seriously challenge NATO in two theaters of war simultaneously.

The West must convey a simple message forcefully: within the boundaries of Russia, Russians can live as they like. But only on the condition that the same right is granted to neighbors. Strengthening Ukraine is not tantamount to weakening Russia. The tsarist and Soviet past cannot be defined by Moscow alone. It is a past shared with other countries, whose perceptions differ greatly from those of the Kremlin. If Russia wants safe and stable borders, it should offer the same to its neighbors.