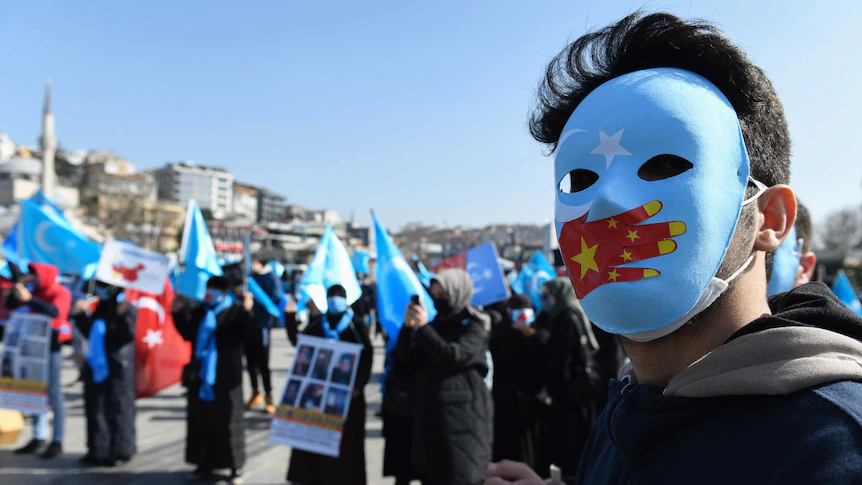 The Coalition has ramped up its calls for the government to sanction Chinese officials over human rights abuses in Xinjiang after the foreign minister declined to meet prominent Uyghur advocates in Canberra.

Senior representatives of the World Uyghur Congress and two survivors of internment camps in Xinjiang have travelled to Australia to press the federal government to officially recognise Uyghurs as victims of genocide and help ramp up international pressure on China.

The president of the World Uyghur Congress, Dolkun Isa, said while he appreciated Australia’s work to increase pressure on China in international organisations over human rights abuses in Xinjiang, Australia was yet to take any concrete steps against officials responsible for the torture and repression of Uyghurs.

He also said he was deeply worried Australia would soften its stance on the issue as it tried to rebuild ties with Beijing.

“The Australian parliament is still silent on this and doesn’t recognise this as genocide,” he said.

“We are coming here today to strongly demand that the parliament recognise the Uyghur genocide.”

The activists told journalists in Canberra they had met with Opposition Leader Peter Dutton and Shadow Foreign Minister Simon Birmingham, but Penny Wong’s office declined to set up a meeting with the foreign minister.

Human rights advocates suggested the government was hesitant to take the meeting because the relationship with China was “delicately poised” following the recent meeting between Prime Minister Anthony Albanese and Chinese President Xi Jinping.

But Senator Birmingham has taken aim at Senator Wong over the decision, saying it was “disappointing the foreign minister declined to meet with the World Uyghur Congress and hear their stories face to face”.

“The opportunity the opposition took to meet with the congress and to hear directly the shocking and appalling experiences of members of the Uyghur community held by the Chinese government in Xinjiang centres was sobering,” he said.

“They are the human faces of the thousands of individuals who have experienced alleged systemic human rights abuses and crimes against humanity outlined in the Office of UN Human Rights Commissioner’s report into Xinjiang released earlier this year.”

The opposition wrote to the government after that report was tabled offering bipartisan support for any targeted sanctions on Chinese officials.

But Senator Birmingham said the opposition was still waiting for a response.

“The Albanese government speaks again and again of condemnation but, unlike most like-minded nations, where is the action on Xinjiang?” he said.

“Before the election Labor talked a big game on the use of Magnitsky-style sanctions and they now enjoy bipartisan support to do so, so why the inaction?”

A spokesperson for Senator Wong said she had asked a representative from her office as well as “senior officials” from the Department of Foreign Affairs and Trade (DFAT) to meet with the delegation.

“Senator Wong has previously met some of the Australian representatives in the delegation, and she looks forward to the next opportunity to hear from Uyghur Australians,” they said.

Australia was one of the nations that pressed the United Nations Human Rights Council to debate the recent report outlining serious abuses in Xinjiang, and the spokesperson defended the government’s record on the issue.

“The foreign minister has made clear the United Nations findings of serious human rights violations in Xinjiang, some of which may constitute crimes against humanity, are deeply concerning,” they said.

“Australia has consistently condemned human rights violations against the Uyghurs and other ethnic and Muslim minorities in Xinjiang and across China. The Australian government has raised its concerns at the highest levels.”