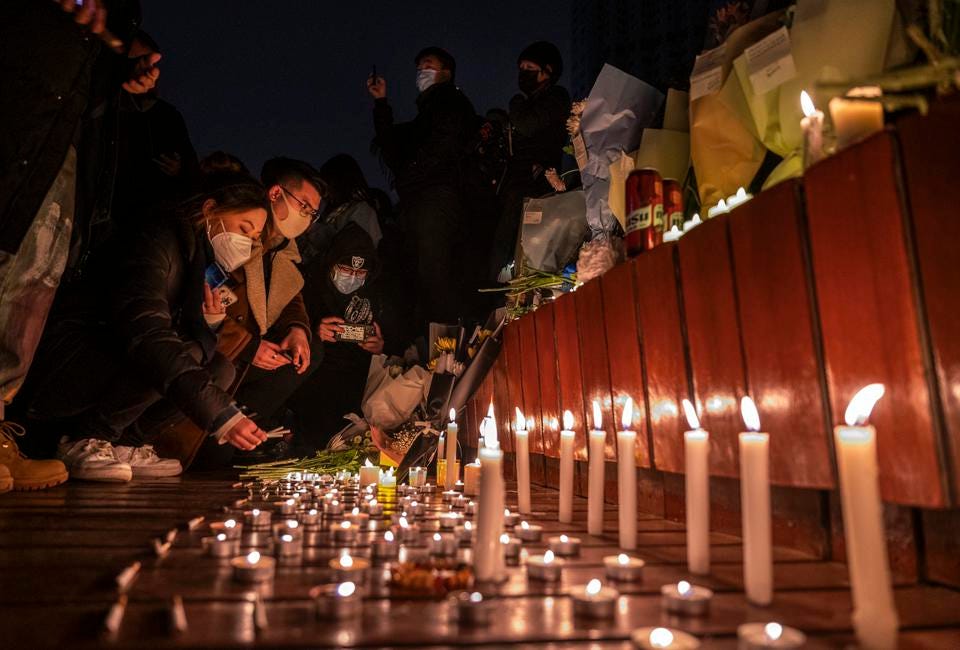 In the wake of a wave of protests that gripped numerous Chinese cities at the end of November, the national government in Beijing suddenly relaxed its strict Covid-19 restrictions. The pandemic control system of lockdowns, mass testing, quarantining in state-sanctioned facilities, and electronic contact tracing and surveillance, has largely been lifted.

Emerging evidence suggests that a massive surge in Covid-19 infections has ensued. There also appears to be a steep rise in Covid-19 hospitalizations and deaths in the capital, Beijing. Yet, officially, the government hasn’t reported a single death since December 4th. Also, China’s National Health Commission stopped providing total Covid-19 case counts this week.

Anecdotal evidence, on the other hand, indicates a brewing emergency. Normally very busy streets in Beijing are mostly empty. Many stores are closed. This time, however, it’s not lockdowns preventing stores from opening. Instead it’s Covid-19 itself. People are staying home because they’re sick, which leads to staff shortages in the service sector.

More ominously, Radio Free Asia is reporting that funeral homes in and around Beijing are operating around the clock amid the spike in Covid-19 cases, with cremations now backed up for at least five days. Indeed, people have observed long lines of vehicles at crematoria and cemeteries.

Western media – the Financial Times and the Dutch newspaper, de Volkskrant, for example – have been covering the acute crisis in hospitals, crematoria, and morgues. China is particularly vulnerable, given that its elderly – who are most prone to suffer severe Covid-19 disease – is relatively under-(booster)vaccinated, has comparatively little natural immunity from prior infections, and until now has a limited supply of treatments.

The Chinese authorities are embarking on a large-scale (booster) campaign to combat waning protection from initial vaccinations. Also, China is importing large quantities of Paxlovid – Pfizer’s effective anti-viral used in patients with Covid-19.

China’s scrapping of its Zero Covid policy is viewed by some as a pragmatic step aimed at reviving economic growth. But, in the short term it may backfire by exacerbating already existing supply chain and labor shortage issues. China is the world’s largest producer and exporter of consumer goods. Disruptions across the Chinese manufacturing sector are likely to impact the global supply chain of goods and the world’s economy as a whole. Multinational companies in China are already feeling the effects of the outbreak, and are straining to keep operations running normally.

In addition, the big unknown is how, from a public health perspective, the situation in China affects the pandemic outside of China. It could spawn more mutations; certainly new sub-variants of Omicron, and perhaps even entirely new variants, all with potentially greater immune-escape properties and a higher reproduction number, R0.* In turn, this could set the wheels in motion for more cyclical waves worldwide.

U.S. public health officials say they are “monitoring” the outbreak in China closely, looking for new variants. If regular international travel between China and U.S. resumes, which it may at some point in 2023, this would of course be the vector for the (sub)variants’ spread.