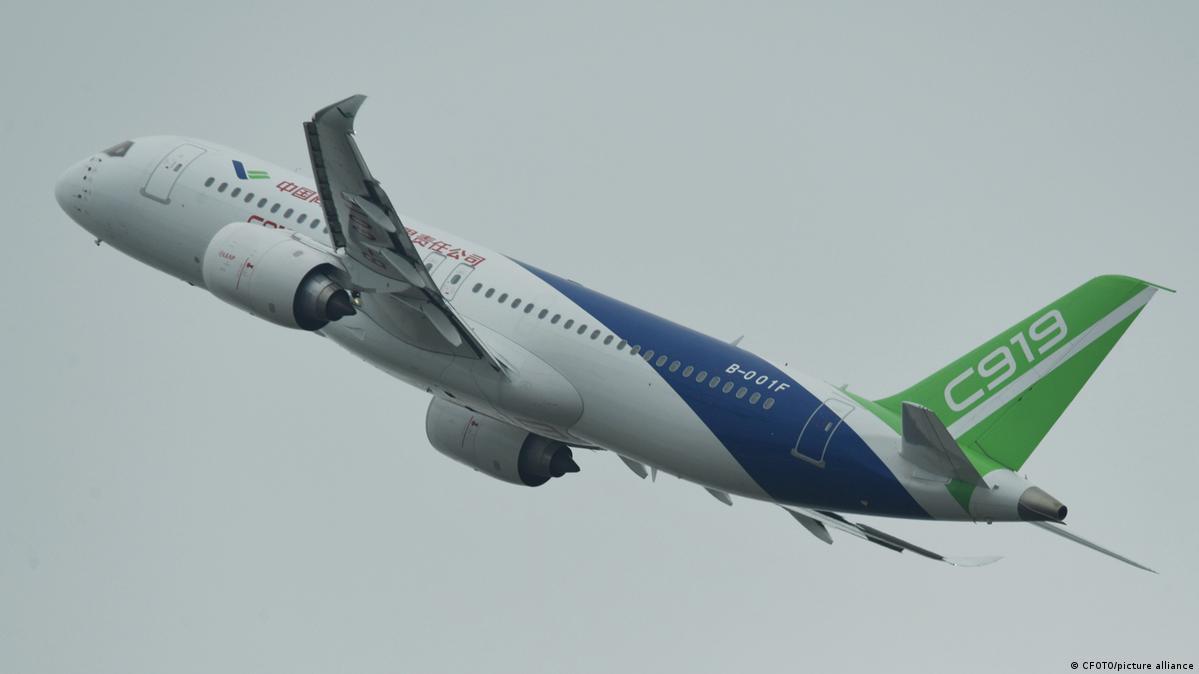 China delivered the first of its domestically produced commercial aircraft on Friday as it hopes to one day challenge the dominance of Boeing and Airbus, state media reported.

The C919 narrowbody jet, manufactured by the state-run Commercial Aircraft Corp of China (COMAC), was handed over to China Eastern Airlines in a ceremony at an airport in Shanghai.

The plane had the words “the world’s first C919” printed on its side in both Chinese and English.

What does the future hold for the C919?

The jet has 164 seats and rivals the Airbus A320 and Boeing 737 Max single-aisle models. The plane was certified for safe operations in September.

Its first route is set to be between Shanghai and Beijing, starting early next year, according to Xinhua. The airline is expecting to receive the remaining four aircraft it has ordered from COMAC over the next two years.

China’s push for homegrown aircraft manufacturing comes amid trade and technology conflicts with the US over the last few years.

However, production is reliant on foreign-sourced parts — although homegrown alternatives are in the works — and the goal of producing around 25 C919s by 2030 pales in comparison to the production rate of its larger Western rivals

About 4,000 government officials and other guests were present at the ceremony that took place at a hangar near Shanghai’s Pudong International Airport. A small truck towed the 39-meter-long plane out of a cavernous building decorated with an enormous Chinese flag.

Although the C919 is made in China, many of the plane’s critical systems such as engines and avionics are being supplied by either foreign firms or joint ventures between Chinese companies and Western manufacturers.

China is one of the world’s biggest aviation markets, with Boeing projecting the country’s total demand for civilian aircraft over the next two decades to be worth over $800 billion. Boeing and Airbus, the European aviation giant, have long eyed the lucrative market and want to position themselves as the main suppliers of planes to China.

Moving up the value chain

However, China’s leadership has been striving to transform the country from being the world’s factory of low-cost goods into a manufacturer of high-tech products. The development of the C919 is part of these restructuring efforts and helps the country ascend the product value chain and become a maker of high-value items.

The single-aisle C919 is expected to compete with Airbus’ A320 and Boeing’s 737 for market share, not only in China but also in other markets. The plane’s maker, COMAC, says it has already received orders for 517 of its jets from 21 customers. While most of the orders come from China-based carriers, there are also a few from foreign ones.

The unveiling of the C919 came just days after Airbus signed contracts with Chinese partners on the delivery of 100 A320 passenger planes and 30 A330 aircraft worth €15.4 billion ($17 billion). The deals were signed during German Chancellor Angela Merkel’s recent visit to China

Boeing and Airbus in China

The number of known orders of C919s is over 1,100 with COMAC announcing orders for 300 of the aircraft just last month.

Earlier in the year, Beijing signed a deal with the European Airbus company to acquire jets worth $17 billion (€16.08 billion). The company also began producing A321 models at a facility in the northeastern city of Tianjin last month.

The US-based Boeing is having a harder time in the country following two fatal crashes that led authorities to ground all 737 Max models since 2019.

The company said in July that it may get approval for further deliveries but US-China tensions and a further deadly crash involving a Boeing 737-800 have hampered progress.